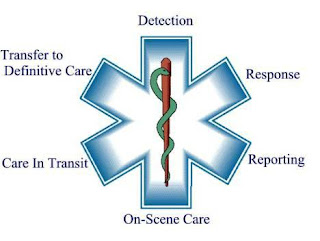 About 20 years ago I was working as an RN in Natick, MA at the Leonard Morse Hospital. One of my "distractions" at that time was writing for the then "Middlesex News" newspaper on the Op-Ed page. The hospital asked me to write something in support of the paramedic program they were in the process of establishing. They wanted something written that the residents of the area could relate to, and in turn support the new paramedic program.

They came to the right person.

In the article I wrote of last seeing my mother on a stretcher being carried down the stairs of our home by the on-call firemen of our town in 1963. I was 9 years old. I also wrote of how a police officer responded to the scene of my sisters drowning in a neighbors pool when I was 16 years old. Each incident was handled the very best way it could have been for the times, but now there was a better way. A better system to respond to accidents and sudden illness other than by First Aid trained first responders, and EMT's. A system that employed paramedics.

The new paramedic system began in Natick and served the surrounding communities. I like to think my article helped to bring the system into place by relating the just what the new service could do for the people in the area beyond what was currently offered by EMT's. There are just times when the immediate treatment with life saving procedures and drugs are needed, something that only the medics can do.

Now, almost 20 years after the implementation of the Paramedic Service in Metrowest, another citizen has come forward and asked for a similar service for this town and surrounding area. Ann Marie Argitis asked the Board of Selectmen this past February to begin staffing Paramedics based on her experience with her husband requiring emergency medical services. Those services were supplied by the town of Brimfield, but Argitis was unaware that there was no Paramedic service available in the area. Her request based upon her own personal experience prompted the Board of Selectmen to bring the idea to the Town Meeting in April. As a result a committee was formed and the actual service went into effect on November 20th.

Incredible. Nine months after initially bringing an idea forward to the Board of Selectmen, it was voted on, explored, worked on, and implemented. Nine months. In the world of small town politics, this was done at the speed of light. If anything, this shows something very important. This shows us all that when an idea is well presented by those that are passionate about it, and well received by others in a position to make it happen, it will happen. Take this as a lesson for future changes as well. Become passionate about your ideas, and present them in a way as to make others passionate about them as well.

As a result of that idea planted in the minds of the Board of Selectmen last February, all of us are just that much safer, and secure. More lives will be saved as a result of the immediate medical treatment given at the scene and enroute to the hospital.

On November 12, 2005 I had a reason to have the Sturbridge 911 called on my behalf. I passed out, and was revived by my now fiance. I had the "worst headache of my life" and nothing I took would make it better. I began to become nauseous, and the discomfort became more unremitting. I knew what it was. My father had died from a cerebral aneurysm when he was 26 years old and I was three. I had expected something like this all my life with every headache I had. Now, I felt, my prophecy was coming true. My fiance called 911, and within just a few minutes the EMT's were in the house. They were smart, professional, and very calming. They knew exactly what to do, and as a result my being revived by Mary, that phone call to 911, and the EMT's caring for me enroute to Harrington Hospital my chances of survival escalated greatly. The care at Harrington Memorial Hospital was excellent, and soon I was flown by helicopter to Mass General in Boston. A little surgery later that evening, two weeks in the hospital and one at home, and I was back at work. Bad haircut and all.

I have never had a chance to thank those that responded to my needs that day. I guess I am doing that now. Thank you.

I am also thanking the Board of Selectmen of the Town of Sturbridge, the voters at the Town Meeting, and most of all, Ann Marie Argitis for taking emergency care we all expect to a much higher level as of November 20th, 2007.

See, things can succeed and move quickly, even in a small town, if we are passionate about them.

Find your passion, and follow through.
Scribbled by Wally Hersee on Friday, November 30, 2007