If You See Jay, Tell Him I'm Doing Fine. 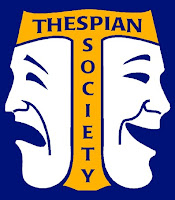 How the heck I ended up doing what I am doing now is a long story, but as much as I really enjoy, and love what I do, it was not my first choice.

Back in high school I found a place that kept me relatively under control, and gave me some purpose. It was acting. I was not that good, although the reviews were awesome. Small towns are like that. They always give credit to those less fortunate. The town paper couldn't very well write, "His acting is like a hand puppet on methamphetamines." No, that wouldn't work. "He did a brilliant job capturing the essence of the crazy uncle, Teddy. It seemed to come so natural."

I directed, and acted in several school productions, and in others, I worked the lighting. My Dad was the music teacher in school. Each spring he would produce the the annual spring musical. "Oklahoma", Bye-Bye, Birdie", and "Fiddler on the Roof" were just a few of the countless musicals he musically directed.

I was in the chorus. I never had the brass to audition my voice in front of Dad except for once. I tried out for the Glee Club, and miraculously made the cut. To this day I think it was a pity choice. My sister, on the other hand, well that's another story. She was always throwing her voice around the house, ever since she was an infant. Now, she teaches music, and sings with the Boston Symphony's Tanglewood Chorus.

I should have yelled more as an infant.

Anyway. I dreamed of attending Emerson College in Boston to study theater arts.  My skills could be honed, and I was willing to learn everything there was to learn. My only talent, that was obvious at the time, was my voice. All my adult life people have commented on the sound of my speaking voice. Gets embarrassing at times. They say it reminds them of the guy on Magic 106.7 in Boston that hosts "Bedtime Magic" every night from 8PM till midnight.

The voice came as a result of "therapy". When I was around 6 years old, or so, I had a stutter, still do if caught off guard. My mother took me to the local doctor, and he advised her to have me read aloud for about ten minutes every night, and to watch my pronunciation, my diction, and the cadence of my speech. She was to correct me as I read aloud. We did those exercises a lot, mostly in the afternoon before Dad got home from work. Soon, I slowed down my speech, thought ahead as to what I wanted to say, and began to adjust my inflection. Today I sound like a DJ, which is handy as heck since I have a face for radio.

But, like all old habits, if I am a bit stressed, as in proposing, or explaining the white paint splotches on my new jeans, I stutter like Mel Tillis. Porky Pigs got nothing on me when I am in full verbal overload. So, I modulate the voice, think of the next word to come in advance (not necessarily the meaning, just the word), and speak like I am hosting an NPR program.

So, why the heck am I babbling about all this? Well, each time I drive by the Sturbridge Information Center on Route 20, and read the the events on the sign out front I drift back to those days when I honestly thought I was Oscar material. The Stageloft Theater posts their performances on that sign, and a short distance down the road, the theater sits comfortably back from the road. I often daydream as I drive by, imagining past roles, and where I might be today if I had followed my dream.

Probably still sleeping in the back seat of my '64 Chevy Mailibu convertible as I did for a while that summer after graduation.

You see, sometimes we end up staring at a fork in the road, because the road we expected to travel is closed for some reason. In the summer of 1972, I was not only staring at that fork in the road, I was sleeping next to it. Plans change. Dreams get shelved, and if we are to survive, we start out exploring those new horizons down that yet untraveled road.

Whoa. Heavy stuff. I know, I know, but things don't get totally lost. Strange things come about as a result. Maybe it's kharma. I never again walked the stage as an actor after that summer. I never did go to Emerson and join Jay Leno in that class of '76. I took two years "off", to "find myself" as we used to call drinking heavily, and staying out all night back then. Then, an epiphany: Nursing School.

Go figure. Don't remember much about the actual decision except that a friend of mine had actually applied to nursing school, and he waiting for his acceptance, and I, halfway through a case of 'Gansett, decided it sounded good. I had always thought that it would be something I'd like to do, now, with no other immediate options, it sounded even better.

Flash forward thirty plus years. It's 2 two o'clock in the morning, and the rest of the world is sleeping, except for me, and a little one armed, 12 pound 13 month old. She that is letting me know in no uncertain terms that she is hungry as heck, and is just not going to take it any more. I crack open a bottle of Enfamil, throw in some protein powder, and show her the bottle as I put on my gloves and gown. All the while, I am talking to her. Talking to her about stuff. My day, my cats, Mary, the other nurses that are way prettier than me. Anything. Softly. Soothingly. Calmly. She quiets down, and fixes her eyes on mine. Listening to the drone of nonsense that she does not recognize as her native tongue, but knows the tone, it is universal. She takes the bottle, still listening quietly. Still looking into my eyes. I change from my monologue to singing to her. Something I only do with those that are very young, and will not be able to retain the memory of the event. It's for their own good. A little Michael Buble, some Drifters, Maroon 5, and whatever else comes into my head. She still listens and drinks, and soon, the lids of her eyes begin to slowly come down like a curtain on the stage.

There are no cries for an encore.

Carefully, I return her to her crib, pull up her blankets, and pop in her binky.

My crib side performance was a resounding success. The reviews won't be in till morning, but talk around the room is that it went very well. I'll return later in the morning for another meal, some more nonsense-speak, a song or two, and maybe some hand puppet action.

I change out of my "costume", and toss it into the wastebasket, as I walk out of the dark room into the bright lights of the hallway.

I never did get to LA, Broadway, or even late night radio, but I continue to perform most nights, for an audience of one, or two. Sometimes, the reviews are amazing, other times, not so good, but I'll be here for the long run, and tomorrows show will be that much better.

There's a lesson to be learned in all this somewhere, but I haven't clue just where it is. Maybe, those road blocks at the fork aren't detours after all. Maybe, they are are guideposts instead. And, maybe an Oscar was never in the cards, and instead it was a "Florence" all along.

I still get to daydreaming when I read the "Hollywood in Sturbridge" blog, or drive by the theater, but I think I'll stick to this role till the show is canceled.
Scribbled by Wally Hersee on Thursday, December 11, 2008