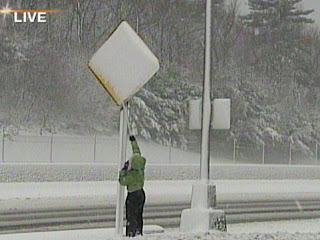 In many ways I am fortunate to live and work where I do. I live just off Exit 9 on the Massachusetts Turnpike, and it's a straight shot to where I work in Boston. I have found that The Pike, is a well cared for roadway, especially during the winter. Oh, there are places that don't get timely attention like a little west of us in the Ludlow/Warren/Palmer area. Seems the MassPike plows head west from their garage on the Pike and then its is a while before they head east again. I discovered this many times coming home in the morning from work in Springfield. The road was great in Springfield/ Ludlow area, then from almost bare pavement, there was 4 to 5 inches of snow and slush on the road.

This happens in various places along the Pike where garages overlap, and exits to turn around are few and far between, but for the most part the Pike is cared for. I have noticed that although it is cared for, the care is being somewhat delayed this winter. There is more slush on the roadway than usual, and I don't see the sand/salt trucks out there as frequently as I have in the past.

One morning last week it took me a little under 2 hours to drive from here to Exit 18, the Cambridge / Alston exit. No bad, considering the weather, but the slush was deep, and in the past that would never have been the case.

This past Saturday night the Pike was horrible. We took in a movie and had dinner on Shrewsbury Street just as the snow was starting to fall. By the time we were done with dinner, the roads had a coating of an inch or so. All the way from Exit 10 to just before the Sturbridge exit the roads were untouched. By now a one to two inch coating of snow, and slush covered the road, and made driving a bit difficult. Usually there is a lot of black pavement showing from the salt and sand trucks that have already made their rounds, but not this time. I put the truck into four wheel drive for more stability and headed west at about 45-50 MPH. The lines on the road were nearly invisible, but not to some cowboys speeding down the Pike in the left lane at greater than 65 MPH. They must have the nerves of a fighter pilot, or an overabundance of the AH gene. It was not until we made it to the Charlton State Police Barracks til the road finally clear from salt that was put down. The Warren plow crew made it this far and then crossed the median to head back west. The Auburn crew had done nothing.

This weekends drive on the Pike was disappointing.

Governor Patrick wants to remove some tolls on the Pike. It's ironic that a few of the tolls he wants to keep are the ones here in Sturbridge, and at Exit 18.

I can't win in this game.

As anti-toll that I am I have to admit that I don't feel that eliminating the tolls in this economic climate would be the best thing to do. The Turnpike Authority is in debt, and if we cut it's income without removing more of its costs, then the Turnpike will fall into disrepair.

Not a good thing.

Keep things as they are on the Turnpike, and keep the tolls as they are as well. Maintain the road, but put off major projects till the debt is whittled down. When to Turnpikes debt is getting close to be being eliminated, then resume the projects, re-think toll elimination and/or hikes.

Cut costs first. Paying toll collectors over $30.00 an hour for one sided arm aerobics is a bit wasteful. Add more Fast Lanes, and eliminate more collectors. If you want to ride the Pike, and don't want to wait for change, then get a Fast Lane transponder. Ideally, there should be only one lane for cash at the tolls. All Massachusetts residents that ride the Pike should have a transponder, and those from a state with the Easy Pass should make sure their transponder is in their car.

More locally, the roads were well treated here in town during the last couple of storms. Mass Highway does a very good job on Route 20, and the Town does well with the side roads and Route 148 except at its most southern end as it meets Route 20. More salt is needed on that hill. Cars coming down the hill have a hard time stopping in time, and some of those going up the hill slip and slide till they crest the hill.

All in all, the plow crews do well during the storms. Our local roads are kept in good shape allowing commuters to get where they are going, and emergency vehicles to get to most anywhere in town without much difficulty. We are fortunate in this regard.

Now, if I can only entice the plow operators to lift their plows when they go by my driveway the world would be a perfect place.
Scribbled by Wally Hersee on Monday, January 12, 2009