Tom Chamberland: Interpreter Of The Year 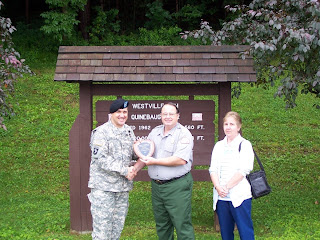 The New England District annually recognizes one of its Park Rangers for outstanding work in interpreting not only the day to day work and mission of the Corps, but seeks to recognize those who reach out with special programs and initiatives. “Tom’s nomination was an easy fit with the guidelines we look for in this award” said Park Ranger Jean Hixson, continuing “Tom has demonstrated not only his ability to meet locally with school groups interpreting the Corps mission and promoting our water safety message, but his initiative in recreational trails, and on his becoming a resource to other park rangers on recreation accessibility for trails and outdoors environments as well as seeking to assist a local non profit group in promoting a 60 mile regional trail effort that can connect 4 other Corps projects, along with his volunteering to serve on a newly formed national ad hock group to promote and expand safe water trails Tom has clearly demonstrated what an interpreter of the year is all about.”

Tom was pleased and surprised when presented the award, saying “I value my work with the Corps, as every day I have the opportunity to inform, educate and improve the lives of school children, and families, when they can get outdoors and enjoy the natural resources of our area. Providing all folks a healthy place to recreate, and the ability to learn a little something along the way is a great job to have. I am honored to receive this recognition from my peers.”

Tom’s nomination will now be presented to the Division level for consideration and if successful, forwarded to the National Level for the Hiram M Chittenden Award, The Corps of Engineers annual outstanding interpreter award.