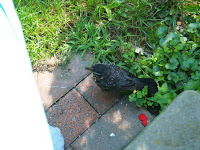 I've said it before, my world is like a Disney movie.

Today I was waiting around in the house for the cable guy to come by when I decided to sit on the back steps, and have a Diet Coke. When I sat down, I heard a little ruckus down and to the right of my feet where the rain spout bends onto the grass. There, sitting on the downspout, was the Bald Eagle you see to the left. Actually, I am not sure if it was a Bald Eagle, or not, it was probably just a Wood Thrush.

He looked up at me, caught my gaze, and did not run for cover. In fact, he advanced a bit toward me. I reached behind me to the plastic bucket I keep the wild bird food in, and tossed some in his direction. He didn't go for it, but he didn't fly off either.

Now, I had to get my camera and take a picture of this character. Too often I tell Mary about all the woodland creatures that stop by each day, and she smiles and nods, but deep down inside her head she is hoping I won't have to go on medication, and that I will be safe when left alone.

I needed proof. Proof of my encounter.

When I returned, I filled a small glass dish with water, and set the little dish in front of my visitor. He promptly hopped up and sat his butt in the water.

As I studied him closer I noticed he had a small piece of grass in his beak, with some dirt around the tip of his bill as well.

I'm by no means an ornithologist, b 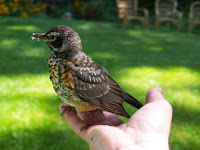 ut I can put things together fairly well. It looks like my friend had taken a header into the sliding glass door on the porch, ricocheted off the glass, and then fell face first in the dirt.

His "laddee-dah" attitude also told me he had taken a good whack to the noggin. He was able to walk about, and open his wings well. It seems the only thing the collision with the Marvin window did was knock the sense of fear right out of him.

After he sat in the Jacuzzi I had provided him, I reached down and took him in my hand in order to examine him closer. He obliged, and did not get all frantic on me. He just seemed to enjoy the attention, and company.

I half expected him to start singing to me.

He hung onto my finger for a while, just long enough for me to snap a couple of photos, and then he looked off, squatted down, leaped from my hand, and flew off to be with the other feathered visitors sitting in the trees. The other birds were just sitting and staring at the strange scene. Their mouths all agape. Covering their eyes with their little wings.

Totally flabbergasted that one of their own was returning to the flock unscathed after its close encounter with human. I hope this isn't the start of something. I enjoy wildlife a great deal, but I've been down this road before. You show a little friendship to a wild animal, they react in kind, and before you know it, they are stopping by every day, eating all your chips and salsa, hogging the remote, watching "The Real Housewives of New Jersey" over and over again, and texting you all hours of the day and night.

Gets to be a bit much.

When I see him later today, I'll just ignore him, and maybe he'll just be a wild bird again. In the meantime, I hope he returns my truck with a full tank of gas.

I should have hidden the keys better.
Scribbled by Wally Hersee on Saturday, September 05, 2009