There's No App for Not Having A Clue...Yet 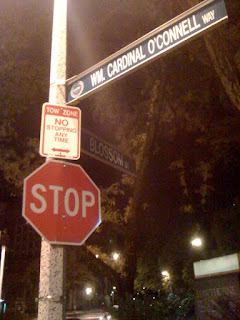 One would think that the signs to the left would be completely understood by Boston drivers.

Unfortunately, as funny as it is to see the two signs arguing with each other, and drivers actually scratching their heads trying to figure out just what the heck to do, they aren't completely ignored--most drivers follow the advice of the top sign.

I am at this intersection for twelve plus hours a day and I see most cars roll through the intersection without coming to a complete stop. This includes official vehicles for the City of Boston, police vehicles, taxis, shuttle buses, and private vehicles as well. Oh, some come to a complete stop if there are pedestrians in the crosswalk, but even then most will roll up and through the crosswalk in time with the pedestrians walking speed so they are on there way just as the walker touches the opposite curb. Do the signs have anything to do with enabling this behavior? I haven't a clue. It may just be the rule of the road for little side streets in Boston, but it sure doesn't help.

Are we that pressed to save time that we need to save every possible moment in our lives so that we can...do what? Twitter more often? Probably.

The above signs are in the City of Boston, and the City of Boston has recently added an "app", or application, for smart phone users to post complaints such as graffiti, potholes, traffic lights not working, or anything else one feels the city may need to correct. This is a great idea. One can post the information either anonymously, or by using ones real name and contact information.

I used the app the other night and posted the photo, and explanation on the cities app. I figured it would do two things:
Simple. I know, most drivers should be able to understand the difference in the signs, but they don't.

A few hours after I posted the photo and my reason for bringing attention to it I did receive a phone call from Boston City Hall, but they did not leave a message. I did receive an email however:

(sigh) Seems like the person that actually posted the two signs together has been transferred to the department answering complaints.

There is a lesson in this. One can develop technology to fit the needs of society, and offer it to help save time, correct problems, or offer advise , but unless the folks at the receiving end of the information have a clue as what to do with the submitted information, then it is useless.

The meeting room that lent itself to the development of the application was full of promise as the developers came up with the idea, but they never figured on the person at the other end of the complaint being unable to figure out what to do with it.

So, what the heck has this have to do with Sturbridge? Well, nothing really, except that as our town moves on in this new century, and they put in place technologies to make our lives easier, they need to think how those technologies will not only be used, but what to do with the information once they have it. Take a lesson from Boston.

In the meantime, keep the new technology coming, we'll iron out the wrinkles as it is implemented, and hopefully there will be a person on the other end of the technology that has a clue. If not, then I'm sure there will be an app for that soon.