It Weren't No Fat Camp 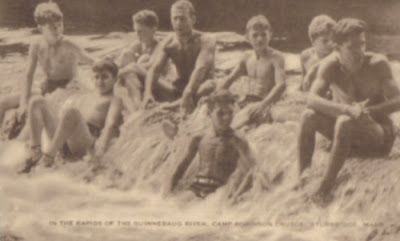 I received an email from a reader last week that was really interesting.  The reader wrote about the photo of the kids at Camp Robinson Crusoe I posted at the top of the page.  What she wrote was in one way so obvious, but in another way so overlooked.  We have, in fact, become desensitized, and her observation proves it.
Here is what she observed. The photograph shows eight young men sitting in the Quinebaug River on what can be assumed to have been a hot summer day.  Nothing unusual about that.  If the camp was still active I am sure kids would be doing the same thing 70 years later, but with today's "Helicopter Parents", the ones that hover and swoop in to shield their child from anything "dangerous" it just isn't going to happen.  They'll hover, swoop in, and pluck their child from "harms way" and then plop them inside the house where the child will gravitate to the TV, computer, or Wii.
But, this is only part of it.  Look at the body form of the eight kids in the photograph:

This photograph is a barometer of where we once were as a society, and where we are today.  Until recent history, say, the late 1960's, when McDonalds began showing up in most every town, and many moms were no longer "stay at home" moms, kids were the same, active, and playing all the time--outside!  My parents would not allow us to stay inside the house unless there was a tornado warning.

As fast food became more accessible, and parents became more scarce, and less in control of a kids spare time, and diet, kids slowly began to show signs of those changes.  Americas diet changed to quick at home Mac and Cheese, and drive-thru burgers-in-a-box just as Americas activity level was decreasing as well.  A combination that would kill millions of Americans over the next forty years, and drastically change our kids.

As time has moved on, and generations have adapted to the new lifestyles, and activity levels of our children, we sit in amazement as Brian Williams describes how fat our children have become.

"Really?  When did this all happen?", we ask ourselves.

We feel as are fighting childhood obesity by limiting a child's time in front of the video games, and TV, signing them up for an eight week stretch of travel soccer, putting granola bars in their lunch box, and only serving multi grain pasta.

Obviously, something is missing.

The missing particle in the grand scheme of childhood obesity is simple.  It's play.

Get vertical and move.  Move a lot, and a bit quicker than running to get the door when Dominoes rings the bell.

Back when that photograph was taken there was no such thing as play dates where kids have to listen to the choir of parents behind them singing, "Don't touch Brianna.", or "Stay out of the dirt.", "NO running!!", "Don't touch that stick", or rock, or leaves, or flower.  Play dates are for parents.  Parental social time they say is for the kids play, and social growth, but it's not.  Forty five minutes of standing and staring at the other kid ain't going to do it.  It's for the parents to talk to other parents with grown-up voices, and to secretly compare their kids development, grades, looks, against another the other kids.

No, there were no play dates back then.  Kids got physical, and played tag, dodge ball, Red Rover, baseball, rode bikes, hiked, and beat the snot out of each other for fun.  And, they did all of the above before noon.  Everyday.

We don't stand a chance.  No six pack abs for this generation.

When I first posted the photograph of those boys sitting in the rapids in the Quinebaug River I saw only another time.  A happy day some kids had while staying at a local camp here in town.  A local, happy time from long ago.  Now, after I received that email, I see a lot more.

One thing I don't think any of us will be seeing anytime soon are eight random kids as fit as the ones in that photo in the same place at the same time.

Yep, those times are gone.

Gone forever?  That's up to us.  We can all start by kicking our kids out of the house early in the morning,  tell them what time lunch is, and hope they find something to do that requires some form of exercise, and not being brought home in a cruiser.  Hope will take care of the former, how you raise them will take care of the latter.

Buying them a bike instead of a video game couldn't hurt, either.  Wild, and crazy ideas like that have worked in the past.
Scribbled by Wally Hersee on Wednesday, July 21, 2010