Sturbridge has literally been at the crossroads of New England since it was first settled.  First there was the Indian trails, and then the Bay Path that meandered from eastern Massachusetts to Springfield.  Along the trails, that eventually became roads, both the natives, and the settlers left "signs" along the way to advertise to, or direct a traveler.  The early signs were most likely stones, or large rocks indicating direction, or marking an important spot.  Later, stones engraved were placed along the roadside by none other than Benjamin Franklin when he was postmaster of the northern colonies.  The stones marked the distance along the Boston Post Roads from Boston in order to set the postal rates.

The Wilbur Cross Highway met up with route MA-15 in 1952.  Those modern day routes were the main roadways connecting Boston and New York City, and thousands of people traveled along them every week.  Sturbridge was at the junction of the cross country highway Route 20, and MA-15 until the Massachusetts Turnpike bisected town in 1957, followed by I-86 (now I-84).  These roadways also were also ideal locations for placing signs for both direction, and advertising. Some were billboard-like, others merely lighted signs advertising a restaurant or an inn.  As the four lane Wilbur Cross / MA-15 gave way to the new interstate I-86 the signs could no longer be seen as well from the vehicles on the new high speed interstate.  So they were left where they stood until the trees overtook them, and forever blocked their message from those coming to town. 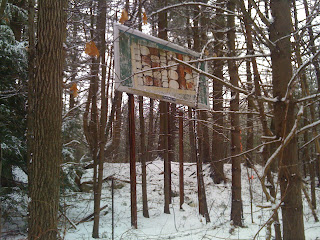 The exciting news is, some of those antique, and historic bits of signage are still there standing forgotten in the woods. Steel and wooden memories of a time long gone. 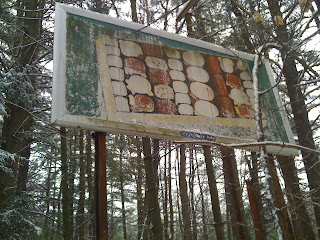 The sign at the left is just off of Haynes Street, Old MA-15.   It stands on rusted steel girders and the image is an open box of chocolates.  There is no text remaining, but the candy looks as good as it did 40 plus years ago.

Roadside "archeology" is a hobby that many study along the highways, and backroads of America, and Sturbridge has many lost and forgotten pieces of modern times scattered about along the roads, or hidden by the continually growing roadside forests.  The late fall and winter, when the leaves are off the trees,  are the best time to discover these facinating glimpses of our history.  Keep your eyes open as you motor around town, and you just may discover a piece of motoring history like the old sign post below. 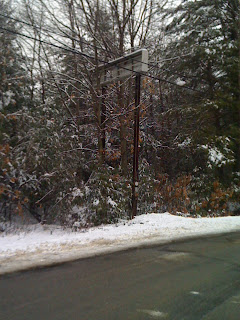 This one is located on Breakneck Road.  Do you know what the sign advertised?  If you know anything about either sign, or have a piece of Forgotten Sturbridge you would like to share, let me know.

Springtime is here, and it's a nice time to go on an explore.
Scribbled by Wally Hersee on Friday, April 01, 2011