It's mud season, not my favorite season, but a close second.  It's a time when change is imminent.  Like the crook of a crocus hunched over in the snow, and mud on Thursday, and fully upright and in bloom on Friday.  Not too attractive at first, but just wait. 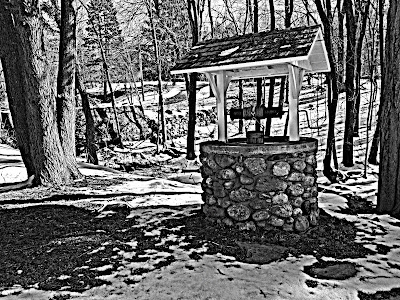 The recent snowfall, although overdue according to some, does nothing to stop the arrival of mud season.  In fact, it may even enhance the seasons gift to us: mud.

It is now that the sap is running in the maples, and dripping into buckets around town.  Although, we aren't a leader in syrup production, we do alright.  It's a good feeling to seek out, and buy a local product instead of pulling an imported one off the shelf at Shaw's.

Mud season is exactly that.  The frozen ground melting as the suns angle increases, and is more in our favor.  Soon, the mud begins to dry, the puddles seep below the turf, and the buds begin to form on the trees.

Be alert.  Look for the signs of the change.  When you see them, it is like a tonic after a long winter with signs of life mostly hidden from view.

A different bird in the garden, small plants showing themselves through the mud, the smell of wet soil, and later, as the air warms a bit more, the peepers announce the official start of life renewed to us each evening.

A short, and simple season, but one with the most promise.

Be alert.  Look for the signs.