A few years ago there was a proposal for a sports complex on Old Route 15, Haynes Street.  The complex would have playing fields, a covered sports field, a canoe launch along the river, and facilities to support the complex.

But, there were problems.  One of the problems was there was not any town water or sewer in the proposed area, and that meant wells, and a vast septic system would be necessary.  Seems like an obstacle worth overcoming since many places don't have town services, but apparently on this plot of land it wouldn't work, and there would be no town supplied services along Route 15.

When I drive down Route 15, and see all the vacant land, I wonder what it would look like today if the complex had gone forward.  Would it be built up with complimentary businesses?  Would one of the top five interstate highway junctions in New England finally be fully utilized, and how would the increased business affect our town?

That, we will never know.  The project was scrapped, and Sturbridge went on living as a Massachusetts town from 1955 wishing it was still 1738.  Cripes, the building of Walmart caused more people in town to have convulsions than a laser light show at a rave.

Sturbridge has a very hard time with change.

Today,  there is a proposal to construct an "action sports megaplex"  off Route 49 along the Charlton /  Sturbridge frontier, and at this point in the approval process with the Town of Charlton, and Sturbridge, the ground is already beginning to shake.

The complex is proposed to be built in five phases.  The first phase would be a campground, motocross park, and a drag strip.  I think that a phrase other than "drag strip" could have been used.  Drag strip conjures up all sorts of images of loud, fast cars, grease and oil, the "Pink Ladies" of "Grease", enthusiastic fans, tires burning out into clouds of blue smoke, and fried foods.

You know, a drag strip.


"This project affects the quality of life for the residents of Charlton and Sturbridge in equal measures," Ronald Charette said. "This racetrack, this motocross track, this drag strip that they are proposing affects all of our lives." 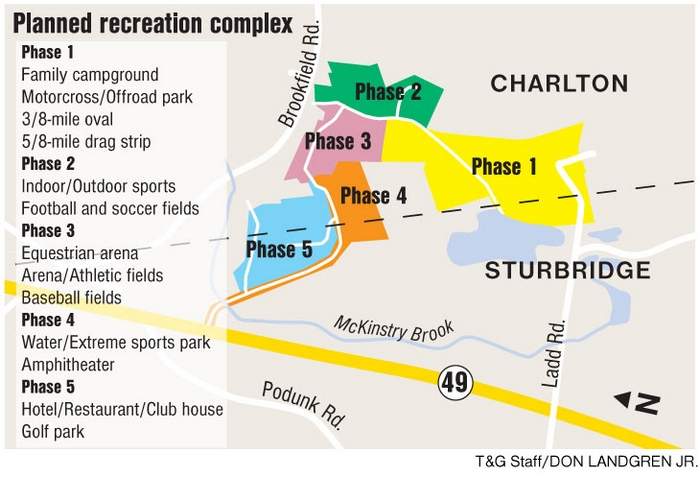 The idea of a racing venue involving internal combustion engines near ones home can fluster the heck out of some folks, and may  just be enough to get the citizens all riled up with their pitchforks, and torches at a Planning Board meeting.

This "megaplex" is five phases, and the racing is only the first phase.  In Phase two they propose football, and soccer fields.  Phase three would be an equestrian arena, athletic and baseball fields.  Phase four is planned to be a water/extreme sports park , and amphitheater, and finally, in Phase five, there will be places to feed, and lodge, all those people playing outside.

Can't wait for the anti-horse, and water park demonstrators to show up.

In the meantime, the ice skating rink on the town common is now open.