Antidote for the Boring Drive

There is a very nice ranch house not far from me built in the early 1960's.  It's a well kept home, a pretty house, that looks the same as it probably did when it was first built.  An attached open breezeway connects the house to a single car garage. Currently, the breezeway has heavy, clear plastic against the screens to keep the winter out.  There are a few aluminum framed, webbed lawn chairs inside.  I haven't seen webbed lawn chairs in a very long time.  From the street one would swear it was still 1963.  When I drive by this home I think of all the stories, all of the history, all the happiness, hard times, and life that was, and is still lived there today.  I wish walls could actually talk, but in a way, they do.  The home speaks volumes. 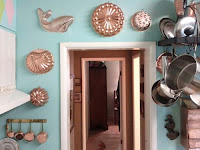 The house was built in a time far different from today, and is comfortable still being there, although the owners have moved on, and grown through fifty years of changes. The single car garage tells of a one car family that moved in back when the space race was just beginning.  No need for two cars since it was usually the father that went to work each day, leaving the mother home to watch over the family, and home.

This particular house is in excellent repair on the outside.  When I pass it each day I imagine the inside is still living in a time when copper gelatin molds hang on the kitchen wall, and crocheted poodles hides the toilet tissue in the bathroom.  Of course, that is a lot of assuming, and imagination at work, but without it, the story would be just a story, and my drive by would be just that, a drive.

I imagine they raised their children in this house, and they devoted all their resources towards their upbringing.  Saved a lot.  Sacrificed even more.  Money was set aside for college, maybe an eventual wedding.  The family car was kept for longer than a few years, and when it came time for a new car, it was newer, not new. 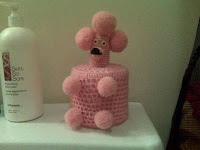 The grass was mowed, and lime put down.  Leaves were raked each fall, and burned in a pile out behind the ranch.  The light, gray smoke joined other swirls from other fires up and down the street billowing high over the treetops.  It gave the spotter at the fire tower something to report on a quiet Saturday morning.

Birthdays were held in the backyard at a homemade wooden picnic table draped with a tablecloth.  Countless games of hide and seek, tag, and kick-the-can were played on that grass as the space race moved on from Mercury to Gemini, and finally Apollo.  The sounds of far away gunfire, and mortar shells were muffled by distance, but heard clearly in the evening on the Philco.

If you stop, and listen quietly outside this old ranch, you can almost hear, through a half opened window, Cronkite speaking from the television, dinner plates clattering in the kitchen, and children teasing each other before bed.  Those simple fifty year old walls are still talking, and if you actually listen, you will hear them.

The ranch is only one house frozen in time on a drive to anywhere.  Some are kept far better, most not kept up that well at all.  Their stories as individual as the reasons for their various conditions,  and those that live inside them.

When you are out for a drive, take notice of that Cape with the rusted swing set nestled in the overgrowth out back, the ruins of a tree house in the oak tree over a driveway, a broken window pane on a garage door replaced by plywood years ago, and the basketball backboard over the garage long missing its hoop.  These are chapters of a home's story left open for us to read. The whole story is not there, nor is there an ending, but those shared chapters, those moments of time, are visible.  Those moments are proof of a life once lived there.

Now, the fun part.  The story those chapters reveal can go anywhere your imagination will allow.  Tangible pieces of reality, mixed with your imagination. When you are a passenger during an otherwise endless, and boring drive, look, and see those moments.  They are the perfect fodder for some quiet thinking, and bit of self storytelling.

One thing is for sure, your ride will be shorter, and far sweeter than you imagined when you let your mind wander into a story.