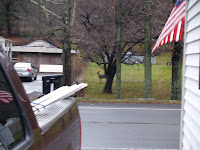 Here in Fiskdale the animals are taking over. Well, not exactly taking over, but maybe just taking back what we took from them. They're bold, and humans don't seem to bother them much. This can be viewed as a wonderful "country thing", and it can be a bit disconcerting as well.

Last winter I discovered tracks in the snow out in the backyard, and after doing a bit of research, I found them to be coyote tracks. Just 20 feet from the house. I didn't see the coyote then, but about 3 weeks ago, I did. I was standing on the back porch about 10 PM, when I heard a rustle in the leaves about 25 feet to my right, then a coyote walked across the back yard about 20 feet from me. I moved my arm and it drew his attention. He turned and looked at me then bolted off towards my neighbors yard at warp speed. Amazing.

We have a couple of feral cats that live around the house. One black and white one, a calico, and sometimes there is a white with black spots cat that shows up and wanders through the yard. After seeing that coyote that night I figured the cat population would drop sharply.

It hasn't. Feral cats are clever, and survivors.

A week or so after seeing the coyote I came out onto the back porch again and off to my left, about a hundred yards away near my neighbors driveway was a deer grazing on berries. I walked a bit closer, and stood very still by my well. the deer picked up it's head, stared in my direction, but didn't see me. I was down wind, as well, so I never tipped my hand. I went back inside and grabbed the camera, took some shots and watched as she grazed along the hillside and up towards the neighbors barn, and then disappeared. It was mid morning.

Yesterday morning I went out to my truck, and noticed a car driving very slowly in front of my house. After it passed I saw two young deer across the street in another neighbors yard, about 25 feet from Route 148. They were eating fallen crab apples and whatever else young deer eat on a Sunday morning. They picked up their heads, looked over at me, and then resumed grazing. They couldn't have been more than 80 feet away. The photo above, although a bad one, shows one of the deer, the other was hiding behind the tree.

I watched them for a bit, took some pictures to prove it to Mary, and then went back inside. This was 8:30 in the morning. Later, around 4:00 PM, they were back in the same place, grazing, with Route 148 traffic only feet away. They were not afraid. I expect them to come knocking on the front door next looking for handouts.

Last summer there was a photo in paper of a black bear taken about a mile north of me on Route 148.

I love wildlife, and I know that they are out there, but I have rarely seen them around the house till recently. Maybe they are just more comfortable with me. Their populations are increasing, and they are becoming bolder. We don't seem to bother them as we once had. There is a chipmunk that lives in the window well of my cellar window. He has escape tunnels all over the yard, and a certain shopping route he takes most days. He'll walk in front of me if I am sitting on the back steps, and not be phased by my presence. In fact, I think he is a bit too bold. He'll walk by me, stop for a second and stick his tongue out in my direction, and proceed on his route, cheeks all loaded up with spilt bird seed from the feeders.

I know that we encroached on the animals long ago, then they, seeing that we had become essentially harmless, except for those wearing orange in the fall, decided to come back. The deer do little other than ravage our orchards, gardens and the bark from the trees in our yards. Deer fencing helps. The coyotes, on the other hand, have made a tremendous comeback, and our refuse, cats and small dogs are fair game for them. I wouldn't leave a small child in the backyard alone, either.

Then there are the turkeys. These guys are the boldest of them all. They'll find a spot, maybe your yard, and call it home for days on end while they eat everything edible there is to eat. If you approach them, the leader of the pack, the Tom, will let you know in no uncertain terms, that you are an interloper. He'll swagger over towards you, in an attempt to lead you away from his harem, and if you don't back off, he'll attack. You don't want this. Turkeys are big, and their talons are sharp.

We were driving along Champeaux Road last summer when we saw a bunch of them on the side of the road. We slowed down to enjoy the site when a Tom came over to the car, lifted his head up high enough to see who I had in the passenger seat, and simultaneously walked along side the car at 5 MPH. As I sped up a little, he kept pace. All the while lifting his head, and checking out Mary. I wasn't sure if he was just curious, or checking out a prospect to add to his herd, but he seemed to get a little agitated as we drove along, and gradually increasing our speed. After a bit I looked into the rear view mirror and saw him in the middle of the road, tail feathers all puffed out, head snapping from side to side. I think we just made it out of there in time that day. He looked like a cocky gang banger that had just protected his turf.

I don't want to tangle with a turkey, unless he is lying quietly on some bone china surrounded by potatoes and parsley.

Then there are the Red Squirrels, but I'll save that adventure for another time. They could still be watching me.
Scribbled by Wally Hersee on Monday, November 17, 2008