Here in Sturbridge we have a great small town. Problem is that the businesses and retail stores in town are spread all over the map. We don't have a real downtown. Town offices sit off by themselves, the Post office does the same. The stores for groceries and sundries are off by themselves in plaza's on Route 20 and down Route 131.

Fiskdale does have a lot of stores on Main Street, however most are specialty shops, insurance agencies, restaurants, a convenience store, and one small grocery store.

We certainly ain't a walking village despite our small population.

This got me wondering about those folks in town with limited transportation. How do they take care of their day to day errands without a car? Do they wait for once a week transportation to the supermarket, and try to accomplish what they can all in a space of a few hours? Do they rely on neighbors, and family?

Where's the independence in that?

So, I was looking at an old photograph of a trolley car in front of the long gone Fair Grounds on Main Street, and it hit me: we need a trolley.

Not an actual ride-on-the-rails-trolley, but a trolley car like the other tourist towns in Mass. have. One that looks like 1903, but with windows that close to keep out the weather. And, it could run on natural gas, or propane.

We could start out with one trolley on a scheduled route from Fiskdale down Route 20, onto Route 131 towards the Southbridge line, and then back down 131 again to Hall Road to Route 20 and on to the Hobbs Brook Plaza, then back to Fiskdale again. This would be the rough route, it could be adjusted depending on where the need exactly was. A schedule would be made, and the trolley would follow that schedule from morning to late afternoon.

The fare would be reasonable. One could buy books of tickets in advance. There could be one price for residents, another for day trippers.

It would be nice if the t 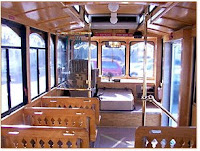 own took on the role of running the trolley, but with the economy as it is, I don't see that happening, but it could be something that a private group could do, and with the resources we have here in town, do very well.

First, we do a search for a "previously owned" trolley. They're out there. Just Google it. Next, once we get an idea what they are costing, we raise the funds. Once we obtain the trolley we bring it on home to Sturbridge, and with the help of skilled volunteers in town, we get 'er on the road.

During this time, the private group has become either a corporation or a charitable foundation, meetings have been held in regards to planning, fund raising, laying out the route, and establishing the fares.

Expensive endeavor, but not insurmountable, the used trolley's run around $50,000.00. Donations and fares could very well pay for it. A large corporate donation could get their name on the trolley, and all the advertising they'd want.

A trolley would mean freedom for so many folks here in our "spread-all-over-Creation" small town. Just imagine tourists scooting down Main Street to all the different shops they'd otherwise miss, residents taking off for a picnic at Westville Dam, or taking the kids to Streeter Beach Recreation area, all without a car. Not only a great idea, but a green one as well.

Just a thought. Now, go back to reading the Sunday paper, but take a turn thinking on it, too.

Another web site that has used trams and trolleys for sale.
Scribbled by Wally Hersee on Saturday, November 08, 2008