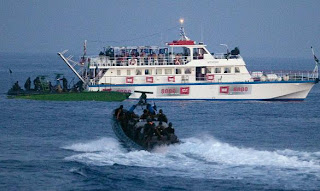 Defending one selves with chairs, poles, knives when attacked from the sky by repelling commandos, or from the sea in boats, with automatic weapons resulted in nine deaths this past week.
If one wants to stop an action there are two ways to do it. The above was the wrong way no matter how one feels. It is no different than fishing with sticks of dynamite. It's called over-the-top, and overkill. I am not interested in arguing whether they had the right to respond, that is a given, they do have a right to respond, but it is the manner in which they do, and did that is disturbing.
When done, it puts those responsible into the same category as others that have no regard for collateral damage, no desire to talk in earnest, and to use as much force as they can to make a point.
No civilized line separates the two. They are both desperate, and acting on impulse.
That is far more dangerous for the rest of us than one side remaining fairly rational.
Now, we are all at risk by two opposing sides, instead of just one group of fanatics.
I have always believed that both sides need a dope slap given by the rest of the world. That belief has only been reinforced this week.
Quite frankly, I am tired of it. Been tired for decades. Enough. If both sides feel that 2000 years of mistrust, and hatred is too much to overcome, then there is absolutely nothing we can do about it, as decades of talking has shown. Keep both parties on the land they both claim as theirs, away from the rest of the world, and let them annihilate each other. But, this is nothing new, they been doing it right along. It is only when they take their fight outside their sandbox that we should react.
I want to see just how the world will respond beyond the rhetoric. Just what will they say, and do. It will be very telling. I hope the words, and actions are chosen well. Maybe, just maybe if done just right, a positive impact could be made.
We can only hope.
Scribbled by Wally Hersee on Thursday, June 03, 2010