Maple Days At OSV – Each Weekend In March

Maple sugaring, Native American stories highlighted events
STURBRIDGE, Mass. (Feb. 9, 2011) – This March, visitors to Old Sturbridge Village will be greeted by the sweet smell of wood smoke mixed with maple syrup as historians demonstrate maple-sugar making at the Village’s own working “Sugar Camp.” Each weekend in March from 10:00 a.m. – 2:00 p.m. visitors can see the sugar-making process, from tapping the trees to “sugaring off,” and will learn why maple sugar was more commonly used than maple syrup in early New England. Interpreters will also cook period foods made with maple sugar by agricultural the hearth at the Village’s Freeman Farm and historians will discuss how maple sugar became a part of the abolitionist movement. 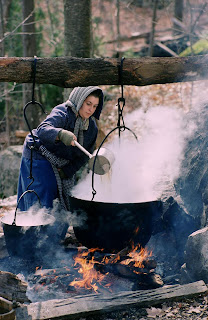 OSV will also present the importance of maple in the Native American culture. Production of maple syrup is one of only a few processes in North America that is not a European colonial import – it was developed by Native Americans and taught to the colonists.  The Indian Doctress Molly Geet, portrayed by Marge Bruchac, will present “Sogalikiosos: Maple Sugar Moon Stories,” and “Fur Mittens and Wooden Snowshoes: Algonkian Winter Fashions.”  For details: 1-800-SEE-1830, www.osv.org.
White sugar was being imported from the West Indies by the 1830s, though widely available, it was an expensive product for some.  As a result, maple sugaring was no longer a common farm activity in areas like Sturbridge, but some families were still producing sugar for their own use, setting up “sugar camps” each spring like the one at OSV. Holes are drilled into the maple trees and the sap is drawn out through hollowed out pieces of sumac called “spiles” and it then drips into hollowed-out half logs of pine or poplar. The sap is then boiled in large iron kettles suspended over an open outdoor fire and reduced down past syrup until it becomes maple sugar. The process often becomes a social occasion, with many people from the village, including women and children, helping, especially with the boiling.  The children particularly enjoy testing the consistency of syrup as it was poured onto snow for a treat called “maple snow.”
Though the sap from sugar maples has the highest sugar content, red maples are more abundant in this area, and both will be included in the Village’s “sugar bush.” Maples are usually tapped beginning between 30 and 40 years of age and can continue to be tapped for sap until they are over 100 years old.  The sap will continue to flow as long as temperatures remain below freezing at night and above freezing during the day.  As the spring progresses, even if the temperatures cooperate, tapping is generally stopped once buds begin to form on the trees as their presence causes an unpalatable taste in the sap. 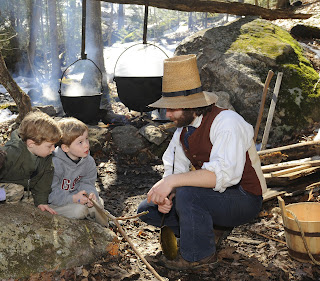 The climate of New England, New York, and southeast Canada are ideal for producing maple syrup and maple sugar – 80 percent of the world’s supply of maple sugar comes from Canada, with most of it produced in Quebec.  Some other countries produce it on a small scale like Japan and South Korea.  South Korea is notable because the sap is consumed as a beverage without first being processed into syrup.
Old Sturbridge Village celebrates life in early New England from 1790 – 1840. Located just off the Massachusetts Turnpike and Routes I-84 and 20 in Sturbridge, Mass., OSV is open year-round, but hours vary seasonally. Winter hours are Wed. - Sun. 9:30 a.m. – 4:00 p.m. (the Village is open on all Monday holidays); Beginning April 2, the Village will be open seven days a week. Admission is: $20 for adults; $18 for seniors; $7 for children ages 3-17; children under 3 are admitted free. Each admission includes free parking and a free second-day visit within 10 days. Woo Card subscribers get 25% of adult daytime admission; college Woo cardholders receive 50% off adult daytime admission. For details, visit www.osv.org or call 800-SEE-1830.
Photos and text submitted by OSV.
Scribbled by Wally Hersee on Saturday, February 12, 2011