A Late Winters Evening In Front Of The Fire 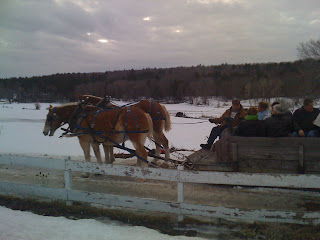 Last evening Mary took me to the Salem Cross in in West Brookfield for their Fireside Feast.  It was a Valentines Day present from Mary.

The feast was fantastic!  This was our second time there, and we will go again.  It is that good.  We started off by taking a sleigh ride through the still snow covered fields with about ten other folks.  Last time we came the snow was mostly gone, and we were pulled about in a wagon.  I liked this better.

After the ride, we went back inside the inn on the lower level where everyone was gathered. We watched the beef cooking slowly in front of the massive fire, the apple pie being prepared on a long table, and to had a choice of mulled cider or warm burgundy wine.  We chose the wine.  It was very good.  Of course, there was a full bar attended for those that wanted their taste of New England to be more on the Sam Adams, or martini side.

Relaxing on the weekend was something we seldom had a chance to do for way too long, and for way too many reasons to list here.  Now we make sure we do.  In fact, it's almost second nature now.

If you have a chance, check out the Fireside Feast next year, or the Drovers Feast held outside during the summer in June and again in September.  There is also a Murder Mystery Dinner Theater as well.

There is so much to offer within a very short distance of Sturbridge.  As long as gas prices stay under $4.00 a gallon you may want to check them out.

And, it will get you mind off the gas prices, too.
Scribbled by Wally Hersee on Sunday, March 06, 2011