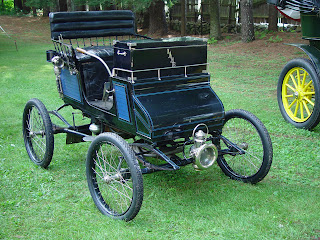 (STURBRIDGE, MA) – May 18, 2011: More than 50 antique cars from 1901-1946 will be on display and take part in a grand procession as part of Old Sturbridge Village’s first annual Antique Car Rally set for 11:00 a.m. – 4:00 p.m. Saturday, June 4 in honor of the 65th anniversary of the museum’s opening. When Old Sturbridge Village first opened in 1946, motorists were allowed to drive in and tour the Village by car.  Among the vintage cars participating are rare early “steamers” from 1901-1922, many early Ford Model As, including a Roadster, Tudor, Sedan, Coupe, and Convertible, a 1927 Chrysler, and a 1939 Ford Deluxe “Woody” Station Wagon. For more information, call 1-800-SEE-1830 or visit www.osv.org
Visitors can view the antique autos and meet their owners throughout the day while the cars are on display on the Old Sturbridge Village Common. The day’s highlight is a grand procession through the Center Village at 3:30 p.m.
The oldest car on display will be a 1901 Lane Model 0 Runabout, owned by Arthur Eldredge, Jr. of Peterborough, NH.  The antique auto was acquired by his father in 1951 and restored over the course of 24 years. It is one of only two cars made by the Lane Motor Vehicle Company known to exist – and is the only one that still runs. The other known Lane auto is a 1910 touring model that was formerly owned by the Ford Museum. Lane-manufactured cars were produced in Poughkeepsie, NY from 1900 until 1911 and were tiller-steered until 1904. The high point in their production came in 1909 when nearly 150 cars were produced. The Lane vehicles were steam-powered or “steamers.” A gasoline-powered burner converted water in the 17-gallon tank to steam and propelled the car for 20-25 miles.
Other antique automobiles that will be on display at OSV include a 1912 Ford Model T Torpedo Roadster, a 1922 Stanley “Steamer”, several Ford Model A’s, and a 1938 Dodge Brothers 4-Door Touring Sedan. For a full list of cars, check the event listing at osv.org
The Antique Car Rally falls just four days before OSV’s 65th anniversary. Old Sturbridge Village opened to the public on June 8, 1946 and welcomed 81 visitors, who toured the Village in their cars and paid $1 admission each. A total of 5,170 visitors came in 1946. Just eleven years later, the one millionth visitor was welcomed to OSV.  Last year, more than 270,000 people visited.
Old Sturbridge Village grew from the personal collection of pre-Industrial New England artifacts collected by Albert B. (A.B.) Wells, whose father founded the American Optical Company in Southbridge, Mass. A.B. Wells and his brothers, Channing and J. Cheney, later realized that their collections should be made available to the public and began plans for a living history museum.
Old Sturbridge Village celebrates life in early New England from 1790 – 1840. Located just off the Massachusetts Turnpike and Routes I-84 and 20 in Sturbridge, Mass., OSV is open year-round, but hours vary seasonally. Currently, the Village is open seven days a week from 9:30 a.m. – 5:00 p.m. Admission is: $20 for adults; $18 for seniors; $7 for children ages 3-17; children under 3 are admitted free. Each admission includes free parking and a free second-day visit within 10 days. Woo Card subscribers get 25% of adult daytime admission; college Woo cardholders receive 50% off adult daytime admission. For details, visit www.osv.org or call 800-SEE-1830.
Scribbled by Wally Hersee on Sunday, May 29, 2011