Is Going Underground Worth The Cost? 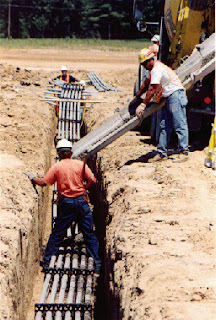 Underground utilities.  One would think that after 150 years of utility lines sitting on sticks alongside the road we would have come up with a better way.  Storms, and accidents have dropped power and communication cables onto the ground ever since we began putting them in the air.

So, why not bury them?  A couple of reasons:  cost, and location.  The cost of  million dollars a mile to bury the cables underground does not inspire the utility companies to change.  Government assistance would be great, but then there is the yearly maintenance cost that we would all end up paying.

Another reason that cables aren't placed underground more often is the location of the cables.  Areas prone to flooding aren't good, and utilities cannot be buried in places that are prone to water damage, still, many areas are perfect, and many special areas, such as along Route 20 in Fiskdale, are long overdue for a change in technology.

I guess until a new form of energy, and communication transmission is developed that eliminates hanging cables in the air, we can expect to loose services when the wind blows hard, or heavy snow and ice falls.  The cost to bring services back online is the cost of doing  business to the utility companies, and a lot less expensive than the cost of burying cables, maintaining, and repairing them.  To those of us affected by lost power, and services, it is trying.  Hours without an electric light is annoying.  Days without power are very trying, unless fully prepared with supplies, and a portable generator.

So, since an alternative form of power transmission is not on the horizon anytime soon, the only other options are playing the odds, and hoping for the lights to stay on, all the time, or installing a generator at the homestead.

The latter deserves some more thought.