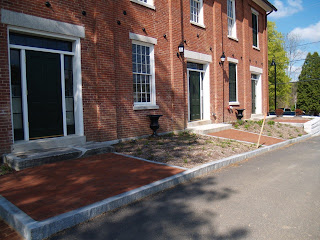 Back on September 15th Selectman Tom Creamer let us all know that the front doors of the town hall had received a variance for full and permanent use from the Architectrula Access Board of the commonwealth.  I wrote about that long awaited news back then.  In the comment section of that post someone wrote:


Anonymous said...
Thanks so much for the efforts and the news about the front door at the Town Hall. Can anyone give us the status regarding the doors at the old school house across the street? It does seem to be a safety issue having only one door accessible to everyone from the outside.
Yesterday I received the following email:
Greetings All,


I am pleased to announce that I was contacted today by Mr. Thomas Hopkins - Executive Director of the Architectural Access Board - and was informed by him that the A.A.B. has “…granted the Town of Sturbridge variance relief to 521CMR Section 25.1 for the main entrance to the Center Office Building. Thus, we have now been approved to implement full access to the Center Office Building via the front doors, similar to that received two weeks ago for the Town Hall. This of course is welcomed news and brings closure to a nearly 3-year odyssey, which was sadly based upon inaccurate and incomplete information that has been associated with this issue since the inception of the renovation plans.
As previously stated in an earlier correspondence associated with the variance approval for the Town Hall, though this issue predates nearly all current members of the Board of Selectmen, it became our responsibility to rectify this issue once we became knowledgeable of its existence; to that end, there was uniform commitment among all members to have this issue corrected on our "our watch". As such, I, as an individual member of the Board, extend my personal thanks to all members for the unanimity of resolve in bringing a successful conclusion to this challenge.


In addition, I extend my personal thanks to Executive Director Tom Hopkins for the proactive approach he took in addressing this issue on our behalf. His initial outreach, followed by a public meeting with the Board of Selectmen and his continued efforts in support of assembling and reviewing the required information prior to submission for determination by the Architectural Access Board provides a clear example of government at its best. Regardless of what the outcome may have ultimately been, Mr. Hopkins took the time to work with us and ultimately guided us to a successful conclusion. That said, I extend my thanks to Town Administrator Shaun Suhoski as well for working closely with Mr. Hopkins, while drafting, assembling, and presenting two variance requests that were viewed very favorably by the A.A.B. Shaun's efforts were commendable.

Moving forward, it is worth noting that the Board had previously instructed the Town Administrator to undertake the measures necessary to address the required hardware allowing for emergency access to the front of the Center Office Building and as that process is underway, we will soon be able to utilize same for all non-disabled access and egress.
Respectfully,
TRC
Thomas R. Creamer - Chairman,
Sturbridge Board of Selectmen
Town of Sturbridge
308 Main Street
Sturbridge, MA 01566
Mobile: 774-696-0903
Fax: 615-634-0903
When the anonymous person left the comment I wanted to respond, "Wait for it, wait for it...", but restrained myself.  I knew it would be handled as well.  Some people do not like to leave a job half done, others are satisfied to accept the status quo.  For those people that  like to make sure things are put right, they feel that it would be a reflection on them, or the group they are associated with not to. Some may say it's an ego thing, I believe it is a simple mater of just doing the right thing for the right reasons.  We are fortunate to have a few folks like this in that newly restored town hall.
It's a matter of turning ones energy toward good, and productive work such as righting the screw ups with the entrances in the two newly restored buildings.
Keep it up, people, there is is a whole lot more to be done in town, and from my vantage point, you're doing swell.
Scribbled by Wally Hersee on Wednesday, September 28, 2011