It's Laundry Day, And I Am Going To Wiggle A Couple Of Loads

Genetically I am a man, and that means that deep within my DNA are certain genes that define my male characteristics.  Some of those characteristics I hope I don't need to explain, but there are a few that some people, mostly female, feel that they are merely behavioral quirks, and not actual genetic characteristics.

There is a Gadget Gene.  I have one, most guys do, and some women have them, too.  Although primarily found in males, the Gadget Gene is found in any one that likes things go whir, light up, beep, and do things beyond what an ordinary device would do.

Last week, after we discussed it for a very long time, I went out to buy a new washer and dryer with Mary's blessings.  She paced nervously at work while I shopped, but she could have relaxed. I had done my research.  I had compared models on consumerreports.org read the reviews of dozen of models, and manufacturers, and knew the things that these machines needed in order to perform: lots of buttons, little LED lights, digital displays, various test modes, beeps, and alarms.  This obvious information, along with my research, and the advise and recommendation of the salesman steered me towards the LG washer and dryer.

Normally, I would check out the Maytag, Whirlpool, or Kenmore, but repair history, and cost brought me to LG.  Now, you have to know where in the World of Laundry I am coming from.  I do all my own laundry.  I figure, my clothes, my job, so I have a stake in choosing the best machines.

It's probably some control thing. 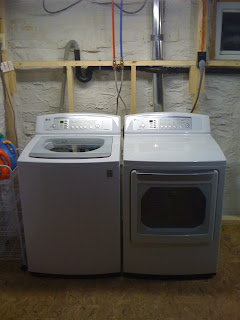 The Laundry World we have lived in, since we bought our home in 2006, was not the best.  The washer and dryer came with the house, and had been installed in the mid 1980's.  I only know this because when the washer died a couple of years ago, and needed a new belt, the repairman we called was the very one that had installed it in the first floor half bathroom back when it was originally purchased.  He told me that he had to dismantle the washer to get it inside the bathroom, and to get it out, well, guess what.

The washer was a simple one.  It has a few dials.  One for the kind of cycle I wanted, one for the size of the load, and another for the temperature.

The dryer was in the basement on a concrete platform by the oil tank.  It had been "repaired" in the past because there was a regular light switch built into the front panel for on and off, and a dial for setting the time for a load.  We only used the timer, and every load lasted sixty minutes.

A lot has happened in World of Laundry since 1985.  The machines we bought this past week do everything except fold the clothes and put them away. 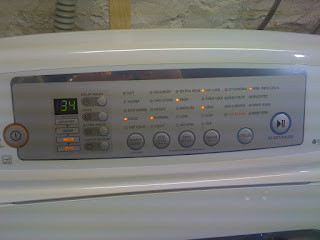 The first thing that grabs ones attention is the control panel on top of the washer.  Lots of choices, cycles, temperatures, and little lights.  The next thing one will notice through the  glass top is that the agitator is gone.  Now, like most of us you may have an agitator somewhere in your life, but you won't find one in a new washing machine.  When you first load the clothes, choose your cycles, temperature, and close the lid the you'd expect the machine to begin washing, right.  Nope, not yet.  These new HE (High Efficiency) machines need to sense the load first to determine the right amount of water needed to clean the clothes in the tub, and just when to release the fabric softener, and what kind of rinse to use at the end of the cycle.

The tub will then wiggle for a minute, or so, as it determines just what it's up against, and when all the data is gathered,  the machine calls for the proper amount of water to be delivered into the tub, and the cycle begins in earnest.

Wow.  This is so cool.  So many functions, so many choices.  So many little buttons and lights.  A true gadget.

But, wait.  There's more.  If the machine acts up an error code will display to diagnose the issue, and if there is still a problem, you simply call the 800 number, talk to the technician, and then hold your phone up to the on off switch.  The washer will then transmit diagnosis signals to the technician to assist with determine the problem.

Tell Mr. Spock they finally invented a Tri-corder for the laundry room.  The true final frontier.

The dryer is massive, and dries really well using far less electricity than the old dryer which almost needed it's own electrical feed from National Grid.  It uses Sensor Dry that determines the moisture level in the clothes, and constantly adjusts the time to dry.

It has lights, beeps, and plays a song at the end of the cycle like the washer does.

Well, this is all very interesting, but a gadget isn't a real gadget unless it performs, and so far these two machines perform really well, and do exactly what the cycle chosen says it will do.  Permanent Press delivers dried clothes completely wrinkle free.

Yep, gadgets are great, and so far I am having fun playing with them.  I'd like to share more about the new washer and dryer, but I have another load to wiggle.