Picking Up Where We Left Off

I've been thinking a lot this morning.  Why do associations, and friendships we make early in life seem to last the longest, and mean the most to us?  Other relationships we make over a lifetime may come, and go, but seldom is there the tightness, the emotional connect we share with those that we have known most of our lives.  Oh, there maybe some special people that enter our lives as we grow older that we may hold as closely, but not in the volumes there was when we were younger.

Did we just become too selective, or cautious as we matured?   Do we purposely keep a distance, and not allow ourselves to to bond like we once did on the playground because it is more awkward for adults when we don't have that playground to support us?

I know, too many questions for the morning.   You can defer the thinking on this one until the commute, in the meantime, humor me. 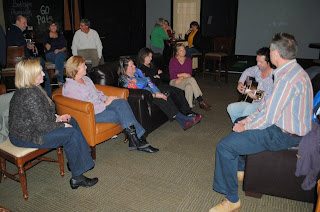 The other night  I attended an informal "mini-reunion" with some old friends from high school.  Some of these folks I have seen once, maybe twice since 1972, others a bit more, but not in decades.  I like this kind of get together.  I enjoyed hearing the voices,  and that long forgotten laughter again.

The chemical responses ones body goes through when old friendships are reignited confound the me.  There is a an overwhelming feeling of comfort, feeling safe, and happiness.  Sharing the night with Mary made it even better.  She was now able to understand some of what I shared with her, and that can be both good, and bad.

I know, not everyone has the same feelings when their past comes back for a visit, but I did, and as I said, I enjoyed it.

We accepted each other as we were the other night.  We accepted each other on how we arrived not so much to the place, but to that moment in time.  We are older, no longer competing with each other for our piece of the pie.  We have our pie, and we are eager to share it as we show photos of our kids, and grand kids on our phones.

This reunion was small, about thirty people, but it was not so much the number of people in the room, or the memories, it was knowing that we had each made it this far in life, and had arrived intact.  Some a bit bumped, and bruised more than others.  Some with more challenges than the next.  No one judged.  A smile, and a hug hello was all that was needed welcome one back to the fold.

Back "then" was such a long time ago, and offered only a chapter in the whole story of who we are, but it was the foundation of who we became.

One can always grow without a foundation, but with one, one is not only stronger, and able to stand up to the forces that confront us, it leads to having a bit more confidence in life.

I was fortunate to have the kind of foundation that friends helped to build.  I am who I am partly because of those early relationships.  How those young people, from forty years ago, responded to life was an example for those around to follow.  Those that did pay attention made a good choice.

So, in a strange way, these "mini-reunions", that happen later in life, are like stepping back and meeting ones younger self as you speak, and act just as you once did, without the need for any pretense.  It's always good thing to let the genie out of the bottle once in awhile.  Helps to center yourself, and sometimes some of us may need a bit of an  adjustment along the way.

Next year will be a big anniversary of our high school class, and you can be sure I will be there once again.  It's like a maintenance program, and I could always use an adjustment now and again.

Thanks to the other night I am good for a bit.