From One World Into Another

Over the past decade a number of new devices, and technologies have found their ways into our lives.  Based on sales numbers, iPods, MP3 players, Smart Phones, and tablet computers have all have found us waiting for them to arrive.  We have welcomed them into  our lives with open arms, or maybe eager fingers should be the phrase.

Our manner of communicating has once again changed.

From cave paintings, to cuneiform script on clay tablets in ancient Sumeria, papyrus writings in Egypt, monks using quills to write illuminated books by hand, and on to the advent of the printing press, our manner of communicating has changed.  We have not only accepted it, we have adapted.

For those of you familiar with the screens on iPads, and iPhones, you are well versed in just how to make things work on the screen by tapping, swiping, spreading, or pinching your fingers together.  The technology is amazing.  The entire system is run by gestures, and when required, typing words onto the virtual keyboard on the devices surface. 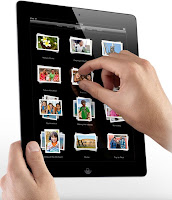 Ten years ago the gestures would have looked as though we were having a psychotic episode.  Today, they are not only widely understood, but accepted as part of our daily lives.  Using a blue tooth earpiece, and talking into the air as you walk down the street still looks crazy as all hell, though.

As our society ties onto new forms of communication, and we adapt to use it in our lives with the special techniques needed to make it work, we will sometimes crossover to things non-technical.  We attempt to use those special techniques, or in this case gestures, on something that is not designed to respond.  I've done it.  I've actually found myself looking at picture in a magazine, and in an attempt to zoom in on the static paper photo I have placed my fingers on the picture, as seen in the photo above, and spread my thumb and forefinger as I would on the iPad to enlarge it.  I quickly remove my fingers, and look around.  So far, I have yet to be caught.

OK, I've just confirmed it, I have a moron side to me, but is it being an idiot, or just becoming so ingrained with the movements necessary to make technology work in our lives that they begin to overlap, or crossover, naturally?

I want to believe the latter.

I know I am not the only one that has "crossed over" from one realm to another.  I have a feeling that somewhere there is a guy standing in front of a large glass window trying to get a better view of an airplane on the runway when he instinctively reaches up and places his pinched together thumb and forefinger onto the glass in front of his eye, and then threads the digits apart on the glass as if to zoom in on the jet.

Somehow he will realize what he is doing, and masterfully cover it up so he doesn't look like a lunatic.  He'll then move on, get in his car, and drive home to Fiskdale.

Many a great idea was deemed to be crazy at first.    This just may be one of them.