Sometimes You Just Have to Be Shown

Last week Mary and I were discussing getting a freezer.  Nothing too big.  Something that could fit in the garage, or be small enough to put in the cellar without getting a hernia.  The freezer in our new Maytag refrigerator was just too small to store a lot of food in.  We had both been thinking about getting a stand alone freezer off and on for some time.  It was one of those "you know what would be a good idea" conversations that people have all the time, knowing all the while that it probably will never happen for one reason or another, but it's always good to talk about.

Now,  every once in a while I am either directed to, or stumble upon, something that is too good to pass up, and it just may coincidentally go hand in hand with a recent "good idea" conversation.   Yesterday I had one of those instances, but this time I had been oblivious, and had to be shown by Mary.

"Did you see the freezers for sale at Shaw's?", Mary asked yesterday morning.
"Freezers?", I asked, "They're selling their freezers?"
"No, Wally, they are selling small freezers for the home for $150, and with the purchase you get $160 in coupons", Mary said slowly so I could understand.

I still didn't get it, but I told her I would look next time I was in the store.

It's funny, but the next time we were in the store was about thirty minutes later.

Mary took me to just beyond the produce section, and there in the aisle were two small freezers stuffed with food representing the freebies that came with the purchase. 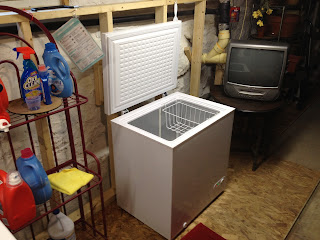 We checked it out.  Good size, not heavy, and the price was right.  Sold.

We took the freezer home, and the two of us took it to the basement and set it up beside the washer and dryer.

Sometimes, no matter how much you say you are aware of the world around you, you still have to be taken by the hand and shown what you're missing.

Happens with lots of things, not just freezers.