There Was Something In The Air Last Night At OSV

Last night the family , and I, went to Old Sturbridge Village for the fourth annual 4th of July celebration, and the fireworks.  This has become a great new family tradition.

We pulled into the parking lot about 5:45, and were led to the far back lot, and instructed to park in such a manner that would make for an easy egress when the fireworks concluded.

That easy egress didn't happen.  We waited 45 minutes, in one spot without moving more than 20 feet.  The event may be top notch, but shuttling thousands of cars out of one exit makes for a bottleneck of massive proportions, and this year was no different despite the Sturbridge Police, and the OSV employees directing traffic.

The fireworks never disappoint, and this year was no different.  The show was fantastic. 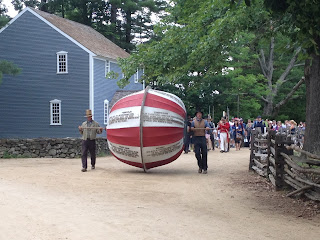 The village opened its gates at 6 :00 PM, and since we did not have a cooler in tow, we were allowed to enter at the entrance next to the security office.  This turned out to be quiet a bonus since we arrived in front of the meeting house a minute or so before the Main Gate was open, and the crowd was lead into the village by the huge campaign ball, soldiers, and musicians.

We settled our chairs on the Common, in front of the stage where a blue grass band played, and listened to the music before wandering off to watch the juggler, and listen to Senator Steven Brewer deliver the Declaration of Independence from atop a wooden platform as was done 175 years ago in villages, and towns around the country on The Fourth.

After the reading, I made a detour to one of the tents set up on the Common, and introduced myself to Sam Adams in a plastic cup, and to Pinot Grigio on behalf of Mary. 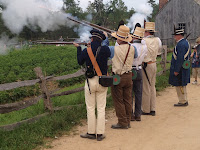 The road leading to the fireworks viewing area in the back fields near the Freeman Farm were scheduled to open at 7:30.  We lined up in about 15 minutes before, and bought a few ice cream cones at the window conveniently located beside us.  Cherry Amaretto Chocolate.  Almost as good as the Sam's.

The back fields were freshly mowed, and filled up quickly.  There were several porta-johns, but after awhile, judging from the long lines, they were far too few.  I took my grandson back to the Bullard Tavern to use the restroom there after waiting in line for 15 minutes at the restrooms near the blacksmith. 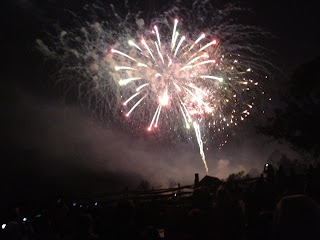 At 9:15 the fireworks began, and flew into the sky over the  village for 30 minutes of multiple volleys, and singular gargantuan explosions over the fields of corn.

The crowd loved it.  We loved it.  There was a few times I caught myself "ahhhing" with everyone else around me.  It is easy to be taken in by fireworks.

At the conclusion of the fireworks display, was the finale, which is always the grand cap to a wonderful evening at OSV.  This year was no different.

Next year I hope they have two entrances leaving the parking lot, and allow folks to park at the OSV education parking lot off Old Sturbridge Village Road, and direct the traffic out towards I-84, and Old Route 15 at the end of the evening.  Sitting in ones car longer than the fireworks display lasted was certainly not the highlight of anyones night.

Thank you, OSV, again, it was a great evening.