Restoring Buildings, And Our Faith 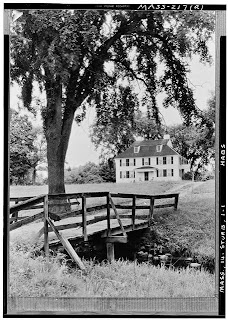 I first wrote of the Oliver Wight House and the Lodges owned by Old Sturbridge Village back in November 2007 about a year after it was first listed for sale by OSV.  I could not believe that it was for sale, and was desperate for ideas to save the Oliver Wight House, and to repurpose the Lodges. Over the months, and in the years since then, I have written about this treasure no longer being used, and sitting abandoned several times.

Now, remember, back in 2006, Old Sturbridge Village was in a large amount of debt.  The Lodges were closed, and the Oliver Wight Tavern, built a few years earlier at the entrance of the village, had been closed as well.  Millions of dollars in debt at the start of the Great Recession, things looked very bleak for the Village.  Then, in 2007,  Jim Donahue came into the picture as the Villages new leader.  With a plan to revitalize OSV, stimulate attendance, and increase membership, Donahue has succeeded.  July 4th fireworks drew thousands, and introduced the Village to a whole new generation.  The costumed interpreters were re-introduced, and long put off maintenance of the buildings was begun again.

Old Sturbridge Village has come a very long way over the past six years, and now, the Oliver Wight House, and the Lodges, are staging an amazing comeback.  Amazing because no one ever thought that the Lodges would ever come back as a modern day motel, but as of June 2013 that is exactly what it will be. 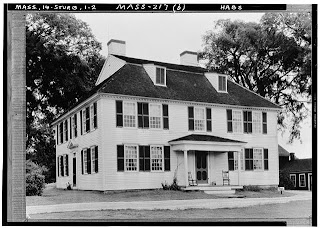 Thanks to one Old Sturbridge Village trustee, Robert Reeder, and his wife Lorraine, who are underwriting the project of restoring, and refurbishing the Oliver Wight House, and lodges, as well as covering up to $200,000 in losses for the first two years as the Lodges reintroduces itself to the public.  Over the past month, the  Oliver Wight House has been scraped, repainted, and has had a new wood shingle roof put on.

The spirit of recovery, benevolence, and history has come together once more at Old Sturbridge Village.  As they have for 66 years, the Village has shown yet another great example of fine leadership, cooperation, problem solving, and planning to inspire the rest of us.  Teaching all of us willing to learn.

Thank you, OSV, for not giving up on our history, and thank you Mr. and Mrs. Reeder for giving them the chance to do so.


Past posts about the  Oliver Wight House, and the Lodges.

Thinking Out Loud In Sturbridge: "Marge, He's Talking About it Again."


Thinking Out Loud In Sturbridge: The Wight House, but the Wong Way

STURBRIDGE —  Since he took over as president and chief executive officer of Old Sturbridge Village in 2007, James E. Donahue has probably heard this question the most: “When are you going to do something with the Oliver Wight building and the Lodges complex?”

Now he has an answer.

“We expect it will open the first weekend in June,” Mr. Donahue said last week.

While renovating the 1789 Oliver Wight house, which sits on its original site facing Route 20, has been on the radar screen of Old Sturbridge Village board members for some time, their focus has been on the living history museum.

“We were focused here, on the museum and on rebuilding our audience,” Mr. Donahue explained.

The house is near the guest lodges alongside Route 20 and is separate from the Oliver Wight Tavern, which is closer to the living history museum's entrance.

When Mr. Donahue took over, Old Sturbridge Village was struggling with a decreasing number of visitors. Since then numbers have grown and the museum has more members, as well.

With OSV facing a $4 million deficit, the Lodges, built in the 1960s, and the Wight house were closed in 2005, as was the Oliver Wight Tavern that had been built in 2000 but had been losing money. The tavern reopened in 2007, but the Lodges have been vacant since the town offices moved back to Town Hall.

In 2009, the town leased space in the Lodges for temporary town offices while the Town Hall was renovated.

Mr. Donahue is optimistic about the museum's future, but he and the trustees weren't feeling secure enough to devote the money needed to the Oliver Wight house at the time.Then a trustee from New York stepped up and offered to fund the entire project — including any losses in the first two years of operation.

Robert W. Reeder and his wife, Lorraine, of Bedford, N.Y., had visited the Lodges with their family and said the place became part of their “family history.”

Mrs. Reeder remembered warmly a romantic stay she and her husband had at the Oliver Wight house back in 1988, during their second trip to Old Sturbridge Village.

“The Oliver Wight house holds a very special place in Bob's and my hearts,” she said.

Trustees had commissioned a study of the site before receiving the Reeders' offer. The study showed that renovations would be costly, with an estimate of just under $700,000, and it projected losses for up to two years as the lodges and house were put back into business.

Mr. Reeder agreed to cover losses up to $200,000, and Mr. Donahue said that has trustees working hard to try to stave off any losses at all.

For many visitors to Old Sturbridge Village, the Lodges evoke warm memories. They were built in the 1950s and operated as Liberty Cap Motel back in 1962, and folks from out of the area often spent a few days at the Lodges while visiting the museum and other area attractions.

Mr. Donahue said a design committee has been working to keep the old feel of those buildings while offering amenities that today's travelers might require.

The trustees and Mr. Donahue are hoping the Lodges and renovated Oliver Wight house, which features original wall murals dating back to the 1830s, will encourage more brides to choose Old Sturbridge Village as the site for their weddings.

“We're confident that it can be profitable,” Mr. Donahue said. “And we will reach back out to people who might have traveled here from New York, New Jersey and Pennsylvania.”

The Lodges and Oliver Wight house wouldn't compete with local motels, but would offer a different experience, which might include some facets of a museum exhibit being displayed there, or events such as an afternoon tea.