That last post about proposals for improving Main Street went very well, and then took on a life of its own about bike lanes.

Some seem to feel that the removal of the fog lines on Main Street, and the repainting of the lines further from the curb have made the curb to the line an official bike lane.  I haven't seen any signs, or bike symbols painted on the road to indicate this, or even a mention in the paper that this was the intent.  It doesn't really matter though, for bicyclist it is a welcome change.

Bicyclists have always been welcome on the road, in fact the "Share The Road" signs are meant to remind both motorists, and bicyclists to do just that.  The laws that govern bicyclists on the road are similar to a motorist.  Signals must be used to indicate turns, unless it is necessary t use two hand on the handlebars, bicyclists must obey traffic signs, and lights, and both cars and bikes must give pedestrians the right of way.

I have a bike, have used it on the road.  Before official bike trails there was no where else to ride.  Having a skootch more room on Main Street will make riding a bit easier.  Yes, the "bike lanes" get narrow at some turns, and eventually disappear, but the road is till there, and one is free to ride on any road in the Commonwealth except for the limited access highways (interstates), and highways specifically marked prohibiting bicycles.  Contrary to what was written in the last post comment section Route 20 is not considered an interstate highway like I-90 is.  Yes, they both wind their way between states, and in both cases go from coast to coast, but Route 20 is not limited access, nor is biking prohibited from that road. 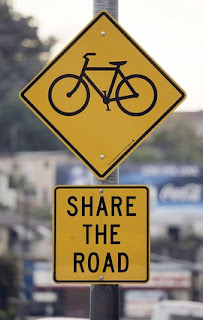 I don't think bicyclist are going to hop on their bikes and go shopping on Main Street.  If the new lines will do anything they will give a little more bike riding room in the business district.  Riding a bicycle on the sidewalk outside the business district is legal, thus no need for wider lanes, but they would be welcome there as well.  On Route 148, where I live, dozens of bicyclists ride by on any weekend day, as well as during the week.  They stay safe by following the rules of the road, and being alert.

Since I don't know who's idea it was to widen the curb to line area, whether it was MADoT, of the Town, or what their true intention was, I really can't comment further.

In any event, if it is an attempt to make the roads a bit safer for those on their bikes, that's great, and if it is for another reason all together, then the indirect effect for those pedaling their butts around town will be welcome as well.

Riding a bike on the road is nothing new.  Kids may be restricted to riding their bikes only in their driveway nowadays, and riding to the ball field, or school a ritual of the past, but someday they'll enjoy the trails, and the roads of Central Massachusetts like so many others

We just need to keep in mind that bicyclists are not intruders on our roadways, they are welcome, and there are laws that protect them, motorists, and pedestrians as well.  If you don't feel riding your bike on Route 20 is safe for you to do, then don't.