I Won't Say It


"Riverlands pollution test reveals new contamination" read the headline in the Town Common this past Thursday.

"New contamination" is a misnomer.  It is not new, in fact, it is quite old.  It is only new to those that are assessing the site.  They missed it the first time around.

Saying "I told you so"  is juvenile, and non productive, however, this morning I am feeling like a kid.  Still, I won't say it.

On November 26, 2007 I wrote about the Riverlands, after taking a walk along that trail with Mary.  "We Bought A Dump, Now What?" received comments assuring me that everything was going to be fine, in fact the town had secured an extra $25,000 to help fix the land. 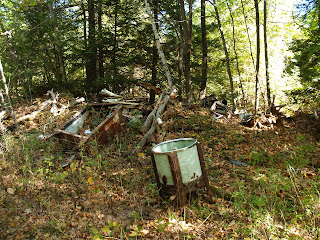 On December 1st, I again wrote about the Riverlands, "About That Dump We Bought", and included some photos we took along the trail of all the debris at the old dump.

According to this weeks article about the Riverlands, the engineering firm hired by the town, Tighe and Bond, will be using new methods to asses the areas of concern.  I am sure the new methods include looking around.

The selectmen would like the area of contamination delineated so that a fence could be erected to keep folks away from the contamination, and out of harms way.  The conservation agent, Glenn Colburn expressed concern that fences could block the migratory routes for wildlife.

In the meantime, there will be no remediation of the land that was used as a dump for many years.  The heavy metals dumped there such as chromium, and lead, will continue to seep into the earth, and into the river.  The trail will be laid out, signs will be erected to warn hikers to stay on the trail, and we will make do.  The selectmen would like it sooner, than later.  Why the hurry now?  Maybe because little has been done since the land was purchased with the exception of making it off limits, and confirming what most in town that knew the land, already knew.

Six years ago there was discussion about the land, and what to do with it.  Some had a vision of what the land could be, and many knew what was on, and under the land, but it was still purchased during our "spend now, pay for 40 years"  period.  Now, there is still discussion on just what the heck to do with this mess we bought in September of 2007.  Six years do not erase, or ease the criticism, it only prompts one to ask, "What the hell has been going on for six years?".  An engineering assessment for six years?  A formula for land remediation that has been labored on for six years?  I have no clue, and it would be nice to know that the past six years were used effectively, instead of the just hoping we would forget about the contamination on the land.

Bottom line is we should never have purchased the land without a bit more due diligence.

Let's see what comes of this latest foray into resurrecting the "Riverlands".  Afterall, we've been waiting for almost six years, what's another few months?

Oh, and I won't say it.  No, that would be really childlike, and wouldn't solve anything.  I can think it, though.