When The Signs Don't Make Sense, It's Time To Ask Questions

There was a problem, though.

The "sign language" the man  performed on that stage, only feet from our President, and other world leaders, was a fake.  He was an impostor.  Not a sign language bone in any of those acrobatic fingers, yet he was not removed.  He was allowed to stand there for the entire memorial service, and continue to pretend to know what he was doing.  No one stood up, and removed him.

He fooled everyone that should have known better.  Those that were watching knew he was a fraud.

The man blames schizophrenia for placing him in the  position of an interpreter for the deaf, and fear for keeping him on stage, and maintaining the charade. 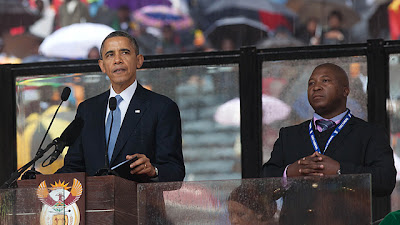 Schizophrenia is a disease, and the man admitted to taking medication for it.  He may have missed a dose, or two, but if what the man said is true, then he has an out.  Horrible way to display an illness, but one can now almost understand why it occurred.  This does not let those off the hook  that should have had  this man, and his credentials vetted.

Some folks that have not been diagnosed with a mental illness can also take on a whole different persona when placed in the public eye.  They can become the  life of the party, or just the opposite.  All it takes is the right response of an audience, and that will lead to what, and how things are said.  Things can go either way, and take on a life of their own.  It can go well, or horribly wrong, and like the man in South Africa, fear may prevent them from stepping down from their stage no matter how it goes.

Amazing how it went on for so long, and nobody ushered him off the stage even though they knew he was not what he was purported to be.