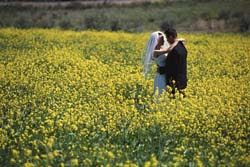 For a couple that had both been down this road before they are very careful to be sure that this time they are making the best decision emotionally. That's a given. They are not into re-runs. And, since they have both been in this place before, maybe something simpler would be a good thing. After all, it's not so much the ceremony, but the life to come after. Right?

A simple day, maybe a wedding in a meadow, a few friends and family, and fire up the hibachi afterwards would be good. As the couple describe the day to each other, they may nod in agreement, and smile to one another. "Yes. A small affair.", "I agree. Nothing large".

"Music would be nice.", one says. And, it would be nice. Maybe something acoustical in the meadow. "Music with the meal would be be better." Meal? Cold cuts on the tailgate isn't a meal? And, a portable CD player isn't good enough?

"What if it rains?" one asks. Well, there are shelters at the park. We could rent one for the day.

Then there is a lull in the planning as the couple mulls over the needs of the other, and the options.

"Let's look around a bit. Maybe find a nice place outside where we can also have a real meal inside a building. Maybe some nice music.".

Then the real planning begins. Although both have been here before, they soon find out that it is not the day itself they want to change, or avoid, it is what comes afterwards. And, having a simple, basic, crackers and cheese affair amongst the daffodils won't change that.

So, after examining their options this couple thinks about where would be a nice place to marry. A memorable place. A different place. A place that means a great deal to them both.

Within seconds images of a ceremony in the Old Meeting House are flashing inside both of their heads. Then they start to visualize the reception at the Tavern. A reception with chairs. Now, both of these places require formal outfits. So, out the window goes the jeans, and sandals.

The man will need a tux. The bride will need a very nice dress, and of course there are flowers to consider, and the meals to be chosen, and the invitations to be decided upon, and then, there's the music. Can't get away from the music.

Then there's the famous "Planning Pause". Two or three minutes of quiet. Just thinking, and finally, "What do we do for the rest of time we have the room?"

"Talk? Wedding charades?"
"Dance."
"Dance?"
"We will need something for guests to do for the rest of the evening. Music and dancing are a natural."

So, the couple has evolved from a wedding amongst the hay in some meadow wearing comfortable clothes, Uncle Larry playing the spoons, with his sister on the zither, sausage on the hibachi, drinks in a washtub to a tux, a dress, real invitations instead of emails, a choice of entrees at a table indoors, a ceremony inside an historic old church, a horse and carriage, a harpist, and a DJ.

And the flowers. And favors.
And thank you cards.

The Theory of Wedding Evolution.

Then, it's the mans turn to answer some questions.

It's funny how some things grow, and take on a life of their own with very little influence from others.