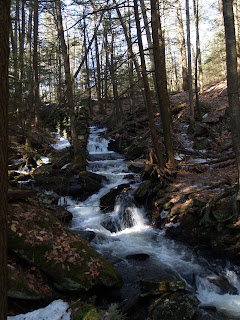 After a posting I made a few weeks ago about the dams and Brook Trout in the Leadmine Mountain Land, I was invited by a member of PLAC, Dave Aho, to take a hike along the brook to see the dams first hand. Dave is a proponent for removing the dams.

I met Dave at the entrance of the parcel on Shattuck Road, and we walked in to the ponds. They are small, but beautiful. The mountain comes right down into the west bank of the ponds. The brook was flowing very fast due to the rain and snow melt over the last several days. I could have watched the water flow down stream for hours, but this was a learning adventure, and Dave has more knowledge of the outdoors than I ever hope to have, so it was time to learn.

As we walked along the brook, Dave explained just how removing the dams would not affect the trout. Yes, the ponds would disappear, but the brook would also be cleaned out and would flow unimpeded to the Quinebaug River. He felt the trout would not swim all the way down river and beyond the Westville Dam. He explained how they feed, and stressed their need for cold water. Cold water is something the brook offers since it is spring fed. The river temperature is higher than the brook.

After listening to Dave explain his rationale to me, he showed me several areas along the stream that have old wooden bridges. The bridges are in poor shape, and will have to be rebuilt to allow access to the other side. The dams look to be in fairly good shape. The concrete sluices were well designed, and after 60 or 70 years show no sign of failing anytime soon. One "dam" is actually a concrete bridge to the other side of the brook. Problem is the culvert beneath it is blocked with debris and the water no longer flows under it, but over it (see slide show above). It would be great to restore this bridge for access to the other side.

We walked along the an old camp road on the edge of the ponds till the road ended, then began to hike along the edge of the stream. Our destination was a waterfall about a mile away. The hike, my first since fall, was a good one. Dave, who is used to hiking most everyday was flying ahead of me most of the way. The brook winded its way from near the top of the mountain and down around its base. In some places it was 10, or more feet wide, and its current was very fast. The water is crystal clear. No industry, or farming has ever been done in this area. There are some areas along the way that show signs that man has disturbed the ground, and moved things around a bit long ago. What ever the reason was , it did not affect the brook.

After hiking for sometime, we walked across a wide open expanse of ground. It was a former gravel pit that the town has purchased some land in for another water well. Perfectly flat for acres, it seemed very much out of place here. We hiked to along the edge of the bowl surrounding the area, and onto the the base of a high hill. "This is it.", Dave said. There, coming down the side of this large hill was a waterfall. It was beautiful. It seemed to start a couple hundred yards further up the hill. The water was flowing very fast, all white except in the small areas pooling against the rocks. About 150 feet ahead of us was an ancient man made stone structure on the left side of the stream. It rose about 10 feet from the stream, and was about 4 feet wide. It looked just like a support that a water wheel may have sat on years ago to power a mill. We took photographs as we hiked along the edge, and found a few more man made stone structures built along the stream bank, then we looked for a place to cross over.

At the top of the hill we found something very interesting. Running perpendicular to the falls was a long stone wall. In, and against the stones beavers had placed thousands of sticks, logs and debris effectively turning this stone wall on the crest of the hill into a dam. Behind the dam was several acres of flooded land. The run off was what was flowing down the stream. It was hard to tell if the stones had been placed there long ago to hold back the water, and the beavers just refined the job, but one thing was certain, if any bit of that tired old wall let loose, it would let hundreds of thousands of gallons burst down that rock lined waterfall and on into Hammant Brook.

After we eased ourselves across the rickety dam to the other side we headed back. Dave would have loved to have kept hiking, but I had some things to do, none of which did get done.

After taking the hike, and listening to Dave tell me about the brook, the trout, and the dams, I have to admit I learned a great deal. Maybe the opening up of the stream won't harm the trout. But one thing I still believe, the dams should stay, otherwise, the ponds would be no more, and those ponds are beautiful.

The land will be used by people hiking the miles of trails. From beginner to expert, the land has trails for every level, but a large number of people will just want to go to quiet place with the kids, sit at a picnic table, and stare out at the water. Not everyone is going to use the area for hiking. Walks along the old roads will be just as popular as hiking up into the forest.

So, from a personal, aesthetic viewpoint, I'd like to see the dams remain intact. A few bridges constructed, and the debris cleared out from the culverts and stream bed would be a great start. And, if they do decide that removing the dams is the only way to go, I hope the area will retain the charm and beauty it now has.
Scribbled by Wally Hersee on Monday, March 10, 2008