I wrote to Bob Briere, our resident historian, and asked him to identify the house in the previous posting.  Bob wrote back, and sounded very definite that the house was an old farm house I had happened to drive by the other day while I was out taking some photos around town.  The current photo at the top of the page was taken at this old farm.  Here is what Bob wrote:

"Hi Wally,
That's an easy one. I knew it as the Finlay farm, on Finlay road (past the golf course on Holland Road). Looks the same today as in the picture because of neglect by a most recent owner. Jim Malloy blew this one. Had over a hundred acres with a pond and it was foreclosed on by the FHA(?). The property is adjacent to the Heins Farm which the town bought which in turn is adjacent to the land that goes northerly all the way to the river in Fiskdale. What a sanctuary for birds and animals that would have been. The town could have had it for taxes because that owner was so far in arrears."

Well, an anonymous comment was also left stating the house was on Fiskhill Road, so I went there, and to Finlay Road, as Bob feels this is the house,  to take some photos.  Now the mystery deepens.

You judge for yourself.

Note the location of the chimneys and the side windows.  The house also looks like it is on a hill, and both of the suggestions are for houses on hills. 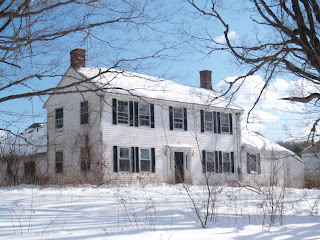 This is the house on Finlay Road that Bob feels is the correct house.  Could be, but there are a couple of problems with this: 1)  the chimneys don't match, and 2) the side windows don't match at all.  There is not an attic window as seen in the old photo, either. 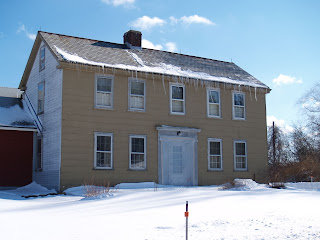 This is a house on Fiskhill Road.  Now, I am not sure if this is the one suggested by the person that left the comment, but it sure could be.  The chimneys don't match up, but with the advent of central heating, it would have been far easier to remove chimneys than to add them in a different location.  The side windows also are a closer match.  The first floor window may have been moved forward when the addition was built.  This has the attic window. 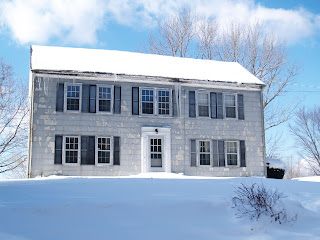 This is another Federal style home on the north end of  Fiskhill Road.  No chimneys, but they could have been taken down long ago, and the center, second floor window doesn't match at all.

There are several other Federal style homes in town, maybe one near you.  Is it a match to the Nichols House, or is that house long gone?