A Do Over With Purpose

On January 27th  the Lewis Tree Service, working for National Grid, swept down Route 148 clearing branches from nearby power lines.  They spent a long time in front of my house, which is also across the street from Selectman Angie Ellison.

Coincidence?  Most likely.  I don't think they read this blog, or give a hoot whose house they work in front of. 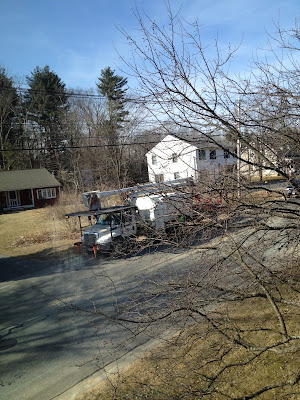 Today I heard that now familiar sound of a wood chipper droning on from the front of this old house, and there they were again.

Twice inside a month!

Cynicism is not one of my traits, and I do give credit where credit is due.  This time would be no different.

After the truck pulled away from where they were working, I saw what they were up to.  There was a dozen, or so, tall trees, not too big, with a diameter of 6 to 8 inches, that stood at the corner of the two lots across the street.  Apparently, these trees had every intent of  reaching toward the wires again someday, and although they had been trimmed just a few weeks ago, they were being "trimmed" again. Actually, trimmed is not quite the word, they were cut in half, leaving 10 foot "stalks" with a few branches remaining.

Job completed.  Effective trimming with ugly results, but we didn't ask for pretty, we demanded it be done well.

No question that those trees will be thinking twice before making their way towards National Grid property again.

Now, here are my only questions to be generated by this work:  was this merely a do over because something they had previously missed had been pointed out to them?  Did they do "touch-ups" along their previously trimmed route elsewhere in town?

I guess it really doesn't matter.  We are just not used to seeing this kind of attention given to something that is an issue.  The fact that they are still in town, and making sure that there will be less chance of us loosing power next time we are hit with 12 inches of snow on fully leafed out trees, or anytime, is great.

Something good has finally come from that October snow.