Time To Schedule A Play Date With Some Old Friends

Ever have a yearning?  You know, a desire to do something more, in addition to, or completely different, than what you are currently doing.  Now, I don't mean moving from the recliner to the couch, vacationing in the mountains for instead of the shore,  or Shaw's instead of Stop & Shop.  No, I mean a yearning that is like a tugging on your belt loop that actually pulls you off balance when you think on it too hard.  These feelings most often happen later in life, middle age mostly, but are healthy at any age.

I have those kind of yearnings.  Always have, ever since I was a kid. For most of them, they took their sweet time in arriving.  Probably had a lot to do with the fact that I took my sweet time in acting on them.

John Lennon wrote that life was something that happened to you while you were busy making other plans.  That was me.  I was making plans to grab a hold of those yearnings, but life just got in the way.  I know, even that is said so often it is beyond cliche.  Unfortunately, it's true

Happens to all of us.  Best we can do is strive for the best, compromise as needed, and never settle for way less than desired.  That's the hardest part: not settling.  Take it from someone that actually competed in the Settling Olympics for way too long, and never once placed.  Then, I chose not to settle anymore, and the results have been remarkable.

Today, I am at a stage in my life that I want to reach up, and grab onto those dreams that have been circling my head for far too long, and see where they take me.

So far, the ones I've latched on to have taken me on a helluva good ride.   Now, I would like to take it one step further.

Dreaming is good.  Real dreaming is actually planning in disguise.

The object in a dream is the goal, like a cottage on the lake, or a cross country trip only on the back roads, or getting that long elusive degree.  Without the dream coming first, the next step could not happen. 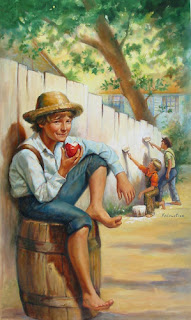 When a dream begins to tug at you, that feeling, that yearning is something you need to act on.  When the puling is becoming almost unbearable, and your world is pretty much in alignment, then it is time to give in to the tugging on your belt loop.

Today, I don't mind getting yanked around a bit.  It's all part of getting ready for a new adventure.

One more thing, don't ever let go of Peter Pan, and by adding Tom Sawyer to the mix it will make for a most excellent mid life play date.  Imagine where you'll go.