I came home from work this past Friday morning around 8:00, and was greeted by my very excited step-daughter, Jenny.  She told me that our mail box, which used be over there was no longer over there, but way up there.  She pointed to a sad looking mailbox sitting high on the snow berm at roadside about 75 feet from its post.

This was our first mailbox vs. plow contest since we moved into this old house on Route 148 in 2006.  Of course, the mailbox lost.

I had placed a tall stake with a reflective red top on it about 10 feet before the mailbox, and I had lined the mailbox post with red plastic reflectors all in hopes of alerting the plow driver that our mailbox was there, and keeping that mailbox attached.  It worked for seven years.  Not bad, really. 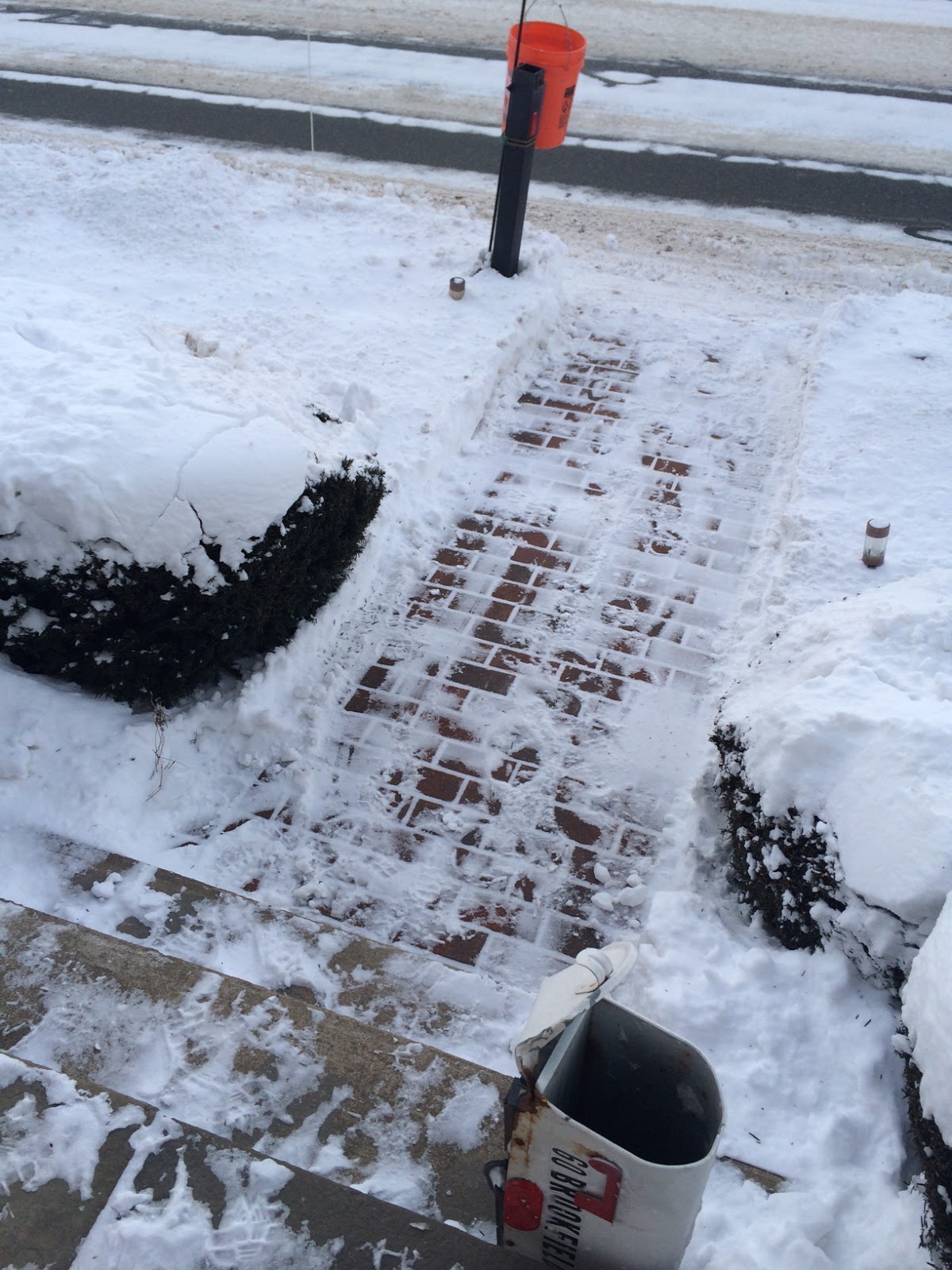 Now, the issue I was confronted with now was making sure we continued to get our mail at our house, but first I had to notify the highway department.  I just wanted them to know that the mailbox had been hit.  The gentleman that answered the phone at the town garage said he would swing by, and check it out.  I imagined it was some sort of documentation thing he had to do in order to account to the damage the mailbox had done to their plow.  In the meantime, I had to work this past weekend in Boston, and that left little time to construct a temporary mailbox anchored in a bucket of concrete.  So, much to Mary's chagrin, I bungee'd a Shepard's crook from the garden onto the post, and hung a large, orange Home Depot bucket from its hook.

I came home from work this morning, and turned the bucket horizontal on the Shepard's crook, and bungee'd the bejeepers out of it. I wanted to keep the rain out of the bucket, and although not the best looking solution, it worked for me.

My plan was to travel to Home Depot later in the day, buy some concrete, a post, and a new mailbox; I already had the bucket, and plant it at the roadside till spring.  Not how I wanted to spend my day off, but just one of those things that has to be done.

Around one o'clock I awoke, and headed downstairs.  I pulled back the curtain and stared at the rain hitting the road, and there, beside our front walkway, was a mailbox, on a nice post, standing in a bucket of concrete.

I swear there was a glow emitting from the mailbox, and heard angels voices singing when I first saw that mailbox. 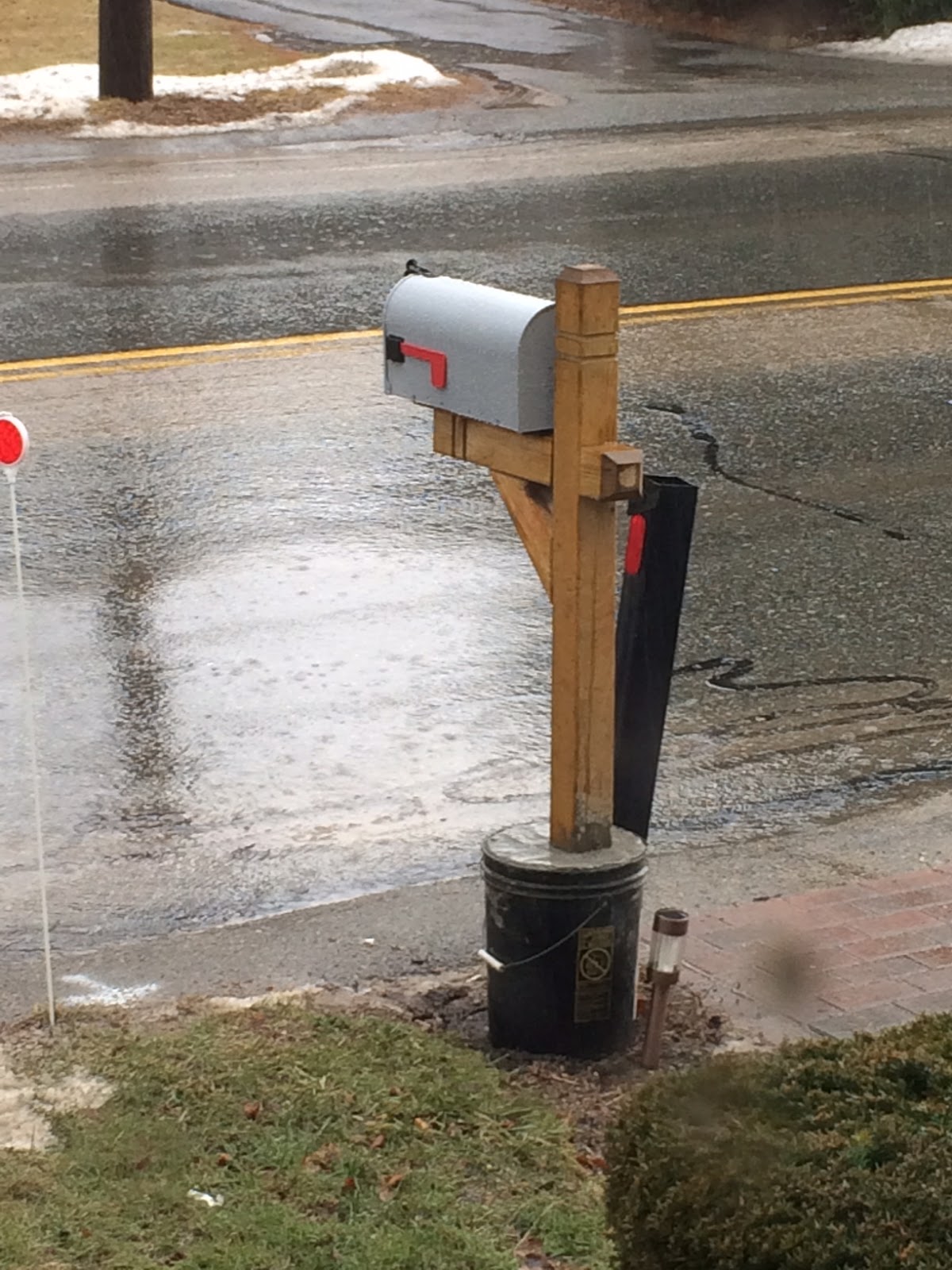 I stared at that baby for a minute, or so, then called the Highway Department, and spoke to the young lady that answered the phone.  I asked if the Highway Department had dropped off the mailbox.  Which, looking back was a really dumb thing to ask.  She confirmed that it was them, and that a gentleman was out placing mailboxes today.

Seems there were other casualties the night of the storm.

I thanked her for the loan of the mailbox, and told her I did not expect it at all.  I promised I would get it back to them as soon as I could dig a hole, and put in a new mailbox, and post in the spring.  Funny thing is I had planned on putting a new post and mailbox in last fall.  In fact, I had notified Dig Safe, and they came out to mark the utilities along the road so wouldn't pierce a water main digging a post hole.

Good thing I waited.  In the spring I'll move everything back a foot or two, and hope we can avoid another snowplow encounter in the future.

The bottom line is that I am a happy man today.  The Town of Sturbridge, specifically, the Highway Department, surprised me, and made my day.  Thank you.