"You Have Arrived At Your Destination. In The Woods. All Alone."

"Really?  Go straight here?  This doesn''t look right", he must have said as he tapped the GPS display with his finger.

Yet, now he was totally committed.  There was no turning back.   He drove his rig,  pulling the 53 foot trailer , into the woods along a road that was first laid two hundred years ago.  The road is dirt, leave and ice covered with small hills, and acute angles.  Not a place for a 2014 tractor pulling a trailer that is meant for interstate cruising. 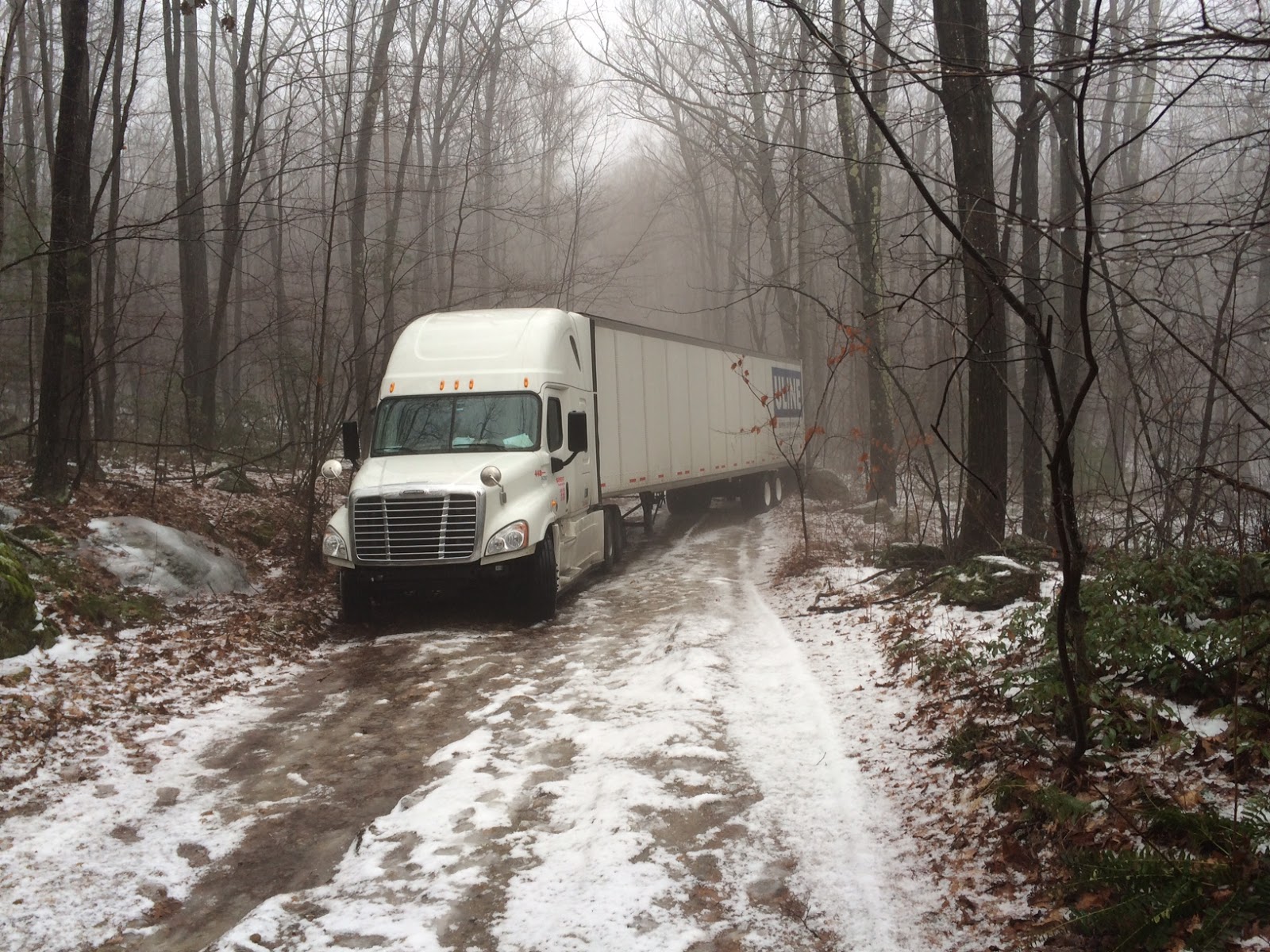 The driver pulled that trailer as far as the road, and slick ice would allow him. Finally, he became hung up making a tight turn on an incline, and he slid back wedging his trailer against a rock in an ancient stone wall.

This  happened around 3:00 in the morning.  At 8:00 that evening, he called for help.  I imagine he spent the night in the truck trying to come up with a convincing script for the benefit of his employer.

The following morning, after I rolled in the door from Boston at 8:00 AM, I received a call from Craig Moran, the owner of the Sturbridge Service Center.

"Hi, Wally.  I know you like hearing about the wacky things in town.  You got to hear this.  In fact, you got to see it!" 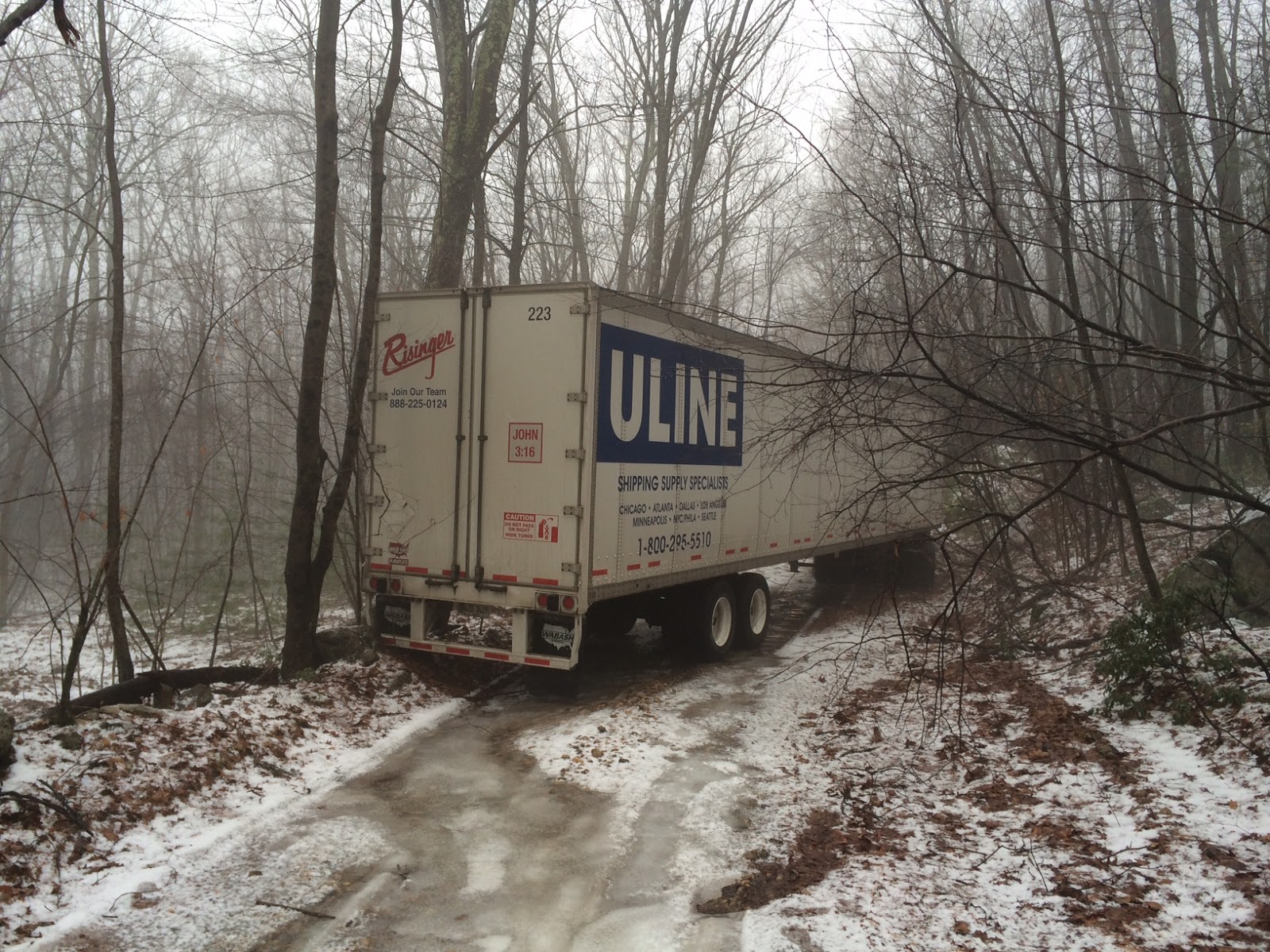 Craig then told me about the truck driving up Stallion Hill Road as his GPS instructed, turned onto Leadmine Road, as his GPS had told him to do, and followed the road for 1.87 miles just as his GPS designed especially for truckers told him to do.  This special GPS helps truckers avoid low bridges, roads unfit for their rigs, and other obstacles they could encounter on their route.

The GPS told the driver to drive straight on Leadmine in order to get to I-84.

If you look at any online map, or any GPS, Leadmine Road is continuous.  It appears that it is a legitimate road from the old Route 15 to the east, to Stallion Hill Road in the west.  Problem it's not.  There is just under a mile of old dirt road riddled with holes, and boulders in the road that is only passable to vehicles with a high clearance, and 4-wheel drive.  This section  connects the two ends of Leadmine Road, and on the GPS one would never know it is a path in the woods.

The driver of the truck had no idea what he was in for.  He, like most of us, just followed the map in front of him, and listened to the calm, directing voice leading him to his destination.

I will admit, I followed this road using my Garmin GPS when I first moved to town in 2000.  I was lucky, and after I posted the photos on Facebook today, another Sturbridge resident mentioned that she had done the same thing.

It's well past time for a fix.

If you pull up a Google map you will notice there is a small "Report a problem" link on the bottom right corner of the map.  I've clicked that link many times to report that a business is no longer where it is listed on the map, or in the wrong place.  Google always researches it, and gets back to me. Today I reported the Leadmine Road fiasco.

The dirt part of the road is marked "Private", if it is private it should be marked as not being a through way.  If it is a town road, then spend some money to either make it a legitimate gravel road, or block it off with a gate.

The poor truck driver is probably in hot water with his company, and they may accept his reason that he was stuck in the forest because the nice lady on the GPS led him there, but most likely they are going to ask, "Why didn't you back out, and turn around?".

By the time he realized something was wrong it was too late.  The dice had been tossed.

Technology is moving faster than we can adjust, and fix the issues that it brings to light.  When those issues are made known, we need to do a fix.  In this case a simple sign reading, "Not a Thru Way" would be good.  Sure beats hearing, "You have arrived at your destination", and your stuck in the middle of a forest.