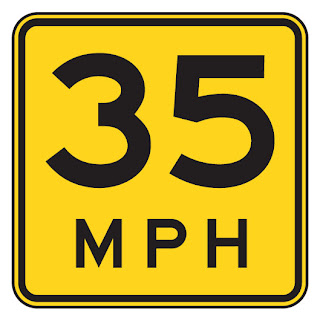 A little over one year ago I met with the Town of Sturbridge Traffic and Safety Committee, chaired by now Chief of Police, Tom Ford. At the meeting I expressed my concern regarding the fast speed of the cars traveling on Route 148, Brookfield Road, in Fiskdale.

Now, I wasn't concerned about the speed they traveled on the entire road, the rest of the road seems to be marked just fine, and is enforceable. I was concerned just about the portion of the road that starts at Route 20 and ends around Champeaux Road. About a mile or so.


To be more exact, the area in front of my house.

Now, don't misunderstand me, I am not just concerned about traffic safety in front of my house, it just so happens that I happen to live in a "Traffic Never-never land".

Near the beginning of Route 148 , at Route 20, there is a yellow SPEED LIMIT sign. "35 MPH" it reads. About 200 feet further north there is another sign reading "45 MPH". It's where that second sign is that is the problem. That is where the houses become thickly settled. Official Thickly Settled areas in Massachusetts have a Speed Limit of 30 MPH, but the houses have to be 200 feet apart, or closer. Now, to look at the area you'd probably say, "What a nice area. A nice thickly settled area." But, I have learned that it takes more than ones eyes to make an area thick.

For that first mile, or so, the "Thickly Settled" look of the houses is not official. Oh, sure, they sure look like they are, but I learned at the meeting, from Tom Ford, that the matter would need to researched in the Mass Highway records to determine if they actually are settled thickly. I asked whether measuring the distance between the houses is something we could do. "No", I was told, "Not yet. I'll research the records first.".

Something else I learned that day. Those yellow speed limit signs are not enforceable. Nope. The white speed limit signs are enforceable, yellow ones are merely a suggestion, a recommendation. They are a recommended speed for the area. A specific formula is usually followed to determine this. A formula privy to the road engineers based on curves, road width, elevations, and the like. The signs can also be placed entirely at random. Judging form their location, and distance apart, I believe that they were planted where the dirt was the softest.

I was in a worse place than when I came into the meeting.

I did have a suggestion, though. Just relocate the signs. Keep the 35 MPH sign where it was, near the start of 148, and take the 45 MPH sign and move it north to around Champeaux Road.


Simple. We just extended the 35 MPH zone to a mile instead of 200 feet. No need to measure, or research the area for being Thickly Settled since the speed limit would be 35 MPH, not 30MPH. 35 MPH if fine. Just a dig a new hole in the ground a mile north for the sign post, and Voila!

Well, that idea didn't fly. Not complex enough. I was at a committee meeting. One thing I have learned over time is that committees are committees.

'Nuff said about that.

Now, it's been 14 months. We've seen the cruiser parked at the video store parking lot now and again. Its presence does have a nice way of slowing folks down, but I haven't seen the radar sign board, and I haven't seen anyone out there with tape measures either. No follow up phone calls asking me how things are, or "How's the average speed of the vehicles in front of your house today?". Nope, not even a card.

What I have seen is cars, lots of them, at last count, over 7500 per day (I didn't count them, Mass Highway did), and most of those cars are driving fine, taking the "suggestion" to heart, but still too fast. But, there are the other ones, the very fast ones. I'd say about 1 in 10 cars are one of those.

And here I wait.

I have a way of doing things. I expressed a concern. Listened to the experts. Took their advise and agreed to their plan. And waited.


Now, I fully understand that stuff just gets in the way. Priorities have to be set. And, I also understand that folks just plain forget. Boy, do I understand that. If it wasn't for the great signs from Boston to Sturbridge I'd never find my way home each day. I followed up one year after that meeting with a member of the committee, and he forwarded my follow-up questions on to the committee chair.

It's been three months, and I'm still waiting.

I tolerate a lot, but if I respect your position and knowledge enough to seek out your advise, and a resolution to a problem, then don't ignore me. Follow through.

Someday there will be a very bad accident on this stretch of road. Probably not between two cars, or a car and a tree. It will be between a car and a pedestrian. There are no sidewalks here, yet the road is used by walkers, mothers and fathers with strollers, kid on bicycles, and folks scooting across the roadway to their mailboxes. And all for the sake of a tape measure, and a post hole digger.

I am not going to beat this to death. The experts, and the Chief have heard my concerns, and they have the power to act, and make this stretch of road safer. It's in their hands now. After all, they are the Traffic Safety Committee. I hope their lack of action is not their answer. No, I'm not going to beat this to death at all. Someday, a Buick doing 55 MPH is going to do that. And, that day won't be a time for , "I told you so.".

They'll know, in fact, they already do.


For more information regarding speed limit laws in the Commonwealth go to:
http://www.motorists.org/ma/ma2.html
Scribbled by Wally Hersee on Sunday, December 02, 2007