Some Thoughts for a Snowy Sunday... 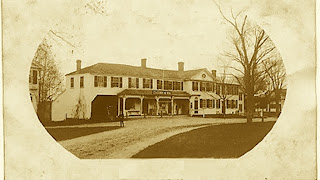 The scene at the left is still easy to identify, although it is at least 100 years old. This building, on Chamberlain Street facing the Town Common, is now four tidy apartments. In this old photograph there were apartments as well along with Corey's General Store in the center, and a stable at the far left. Today, the stable and the old store are long gone, both are apartments.

Time doesn't stand still. Cliche', I know, but it moves along with, and without us. It's moving along as I write these words. Time also brings changes. Just as the stable on the common is no longer needed, and the old general store is long gone, so are things changing here in town today.

I know the folks from the early part of the last century had a hard time when automobiles first came to town and circled the common, when the trolley stopped running, and when the Center School closed its doors for good. We're no different. Seems we are all saddened by the closing of the Le Petite France Bakery, Perennials, Basketville, Van Heusen among others in town. Life moves on. Retirements, breakups, downsizing, and slow business all to blame for the changes.

With every generation we seem to always be at the "crossroads" of change. Funny. Every generation reacts the same to things passing, and to "growth" or change for the future.

The stable owners never saw the future without the need for their stable I'm sure. How could they? Just as some don't see the need for larger facilities in town, safer roads, more recreation facilities, and such. You can't blame them. Some are gifted to be able to see beyond the hill, others are not. It's that simple. All we can do is help others see that change, and growth is not all bad. In fact, with everyone on the same page, it can be controlled, well thought out and a wonderful experience.

And, for those that are steadfast in their resolve not to move forward, find out the true reason why. It is very likely fear. Find out the cause of that fear, and work with them. Don't assault them. Compromise is a great thing. We will survive the times, and if we are totally honest with each other, compromise, and work together for the one goal of improving our lot on this small parcel of land, then we will be far better off.

Look at that photograph again. The building has changed a lot since the photograph was taken. Did the building change, or did we? Is the town changing today, or is it us?

Just thinking. Now, it's your turn.
Scribbled by Wally Hersee on Sunday, December 16, 2007