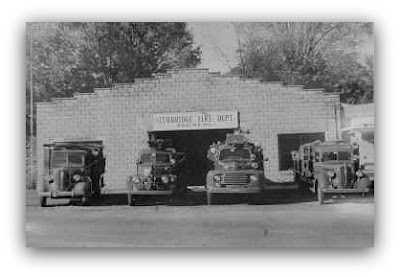 Where was this photo taken?

Normally a comment would be posted in the comment section, but this morning I have an excellent comment from some anonymous source that is well worth giving the stage to.--ed.

"That's the old fire station at Cartier's Corner in Fiskdale. The fire chief, Mr. Cartier, and then the next fire chief, Steve Szumilas, lived right across the street. The old fire station, still in the same location, now houses the dance studio at the beginning of Route 148. The house was moved up to School St. and is a two story white house with black trim. (At least I think it's still that color, just as it was in the 1950's.) Then the intersection of Routes 20 and 148 was done over and the traffic lights were installed. (When the house was located at Cartier's corner, there was a road behind the house, which one could use to "short-cut" between 20 and 148 rather than use the other intersection which had just a stop sign at the time.) When Mrs. Szumilas lived in that house with the old intersection in front and the old short-cut in the back she used to say that the traffic was frightening. Oh, the memories of nice old folks now gone to their eternal reward..." -- Anonymous