Memories On The Windowsill 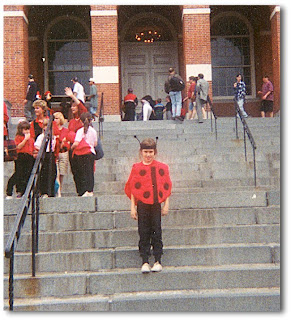 For the past couple of weeks we have been playing "Catch the Ladybug" here on Brookfield Road. Seems that a whole bunch of them snuck into the house last year (and the year before), and after sleeping all winter long in some nook, or cranny, they've woken up. Now, they are walking, and flitting about everywhere, mostly walking up and down the windowsill looking for an exit.
Not a problem. I just scoop up the ones I can, and fling them out the door, or the window. They don't eat much, and besides driving the cats buggy, they are harmless.
Yesterday, as I releasing a few Ladybugs, I remembered that the official insect of Massachusetts is the Ladybug, which is kinda neat in itself, but what makes this even neater is that my daughter, Micaela, actually had a hand in making that possible. Her second grade class was responsible for petitioning the legislature under the direction of their teacher, Ms. Pamela Johnson. That petition became House Bill H.5155, and after a period of time, became law.

Now, this all occurred in the early '90's. Mic is now 23 years old, and graduated from Salem State last May. I still flash back to her standing on the State House steps in her Ladybug outfit every time I capture one of her red and black friends.
As parents we all have a million, and one things that remind us of our children from some moment in time. I have one million and two...er, three,
four, five, six... . As long as these Ladybugs keep appearing on the windowsill I'll keep adding to the memories.
Nothing wrong with that.
Click here to learn more about how the Ladybug became the Massachusetts Official bug.
Scribbled by Wally Hersee on Wednesday, March 24, 2010