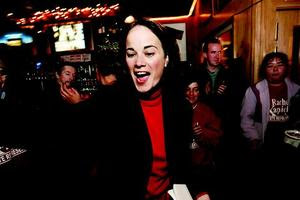 After months of arguing with the RMV about the move of the Registry office from Southbridge to the Charlton rest stop on the Mass Pike, two things have come to light over the past week or so. These things should cause not only those of us that live out this way to raise an eyebrow, but also cause those at the Statehouse to raise the other one.
At a recent meeting with RMV officials, and RMV Registrar Rachael Kaprielian, local folks again spoke about how unsafe the move was to the rest area on the Pike. It was a very long walk to the RMV office, and traffic in and around that long walk was dangerous to those making the trip. They also made mention of how unsafe it was coming in off of Route 20, and leaving the lot onto Route 20.
This has all been said before. The RMV has heard it all before. This time they sat, and listened until the end, and then told the audience they had a solution they would implement. They were going to close the parking lot off of Route 20, and the only access to the RMV would be eastbound from the Turnpike, and the only way out would be eastbound along the Turnpike.
I'm sorry, come again?
The RMV wants to close a parking lot they have no jurisdiction over. A parking lot that is used by employees of the rest area to park in, deliveries to be made to the stores, and more recently, for customers of the the RMV to use.
When Ms. Kaprielian made the statement it was not so much an announcement of a plan of action, but rather an attempt to shut the opposition up once and for all. You want to keep complaining about how unsafe it is in the parking lot, and coming and going from Route 20, fine, she has a plan:
She is offering an RMV, a Registry of Motor Vehicles office, with no parking for motor vehicles.
Unless, of course, one wanted to drive their motor vehicle onto the turnpike, pay the toll, go to the RMV, get back on the turnpike, get off, pay an other toll, and then turn around and repeat it all over agin just to get back home. Might as well use the RMV in Worcester. Hmm, maybe that's what she wants. Naw.
I wasn't there that night she made the statement, but I believe it got kinda quiet after she made that ludicrous statement.
Just the way she wanted it. It is as if she is saying, "You keep harassing me about moving the RMV, and I will not only not listen to any concerns from anybody, but I will make it even harder to use the RMV."
'Cuz I can. So there. Nyah.
That is how it will be under my watch, a RMV that is unresponsive, and hard to use. Go online if you want convenience.
Now, the other thing that was revealed recently was the fact there was no "sign off" by the State Police as to the safety of the Charlton site as Ms. Kaprielian has stated ad nauseum.
None.
It is obvious that there are issues to deal with here, the least of which is the relocation of the RMV, and safety surrounding the site.
The issue is much larger.
Photo: Rachael Kaprielian, Registrar RMV.