I've had garage sales in the past.  I've had them for the same reason most of you have them: it's a shorter distance to move the stuff to the driveway than it is to the recycling center.

Recycling born from laziness.  What a concept.

When I've sold stuff from my driveway I am not surprised that someone was interested in it.  I was interested in it once, but now, it's either broke, bent, old, scuffed, chipped, or just plain ugly, yet it still attracts a crowd.  Making a few bucks is OK, but waiting the few years in between garage sales can lead to storage problems, and other problems like, " Why is the old wheelbarrow in our closet?", Mary asks.

"I don't know where else to put it till the next garage sale, dear."

At this point in the problem I receive verbal instructions on just how to solve the problem, and where to store the wheelbarrow.

It's not like we turn over the contents of our house every so many years, and put it out in the driveway.  Every so often we do replace something, and the older piece, that still has some life in it, and would enjoy living that life elsewhere, is placed in the driveway.  If you've been married more than once that concept may sound familiar to you. 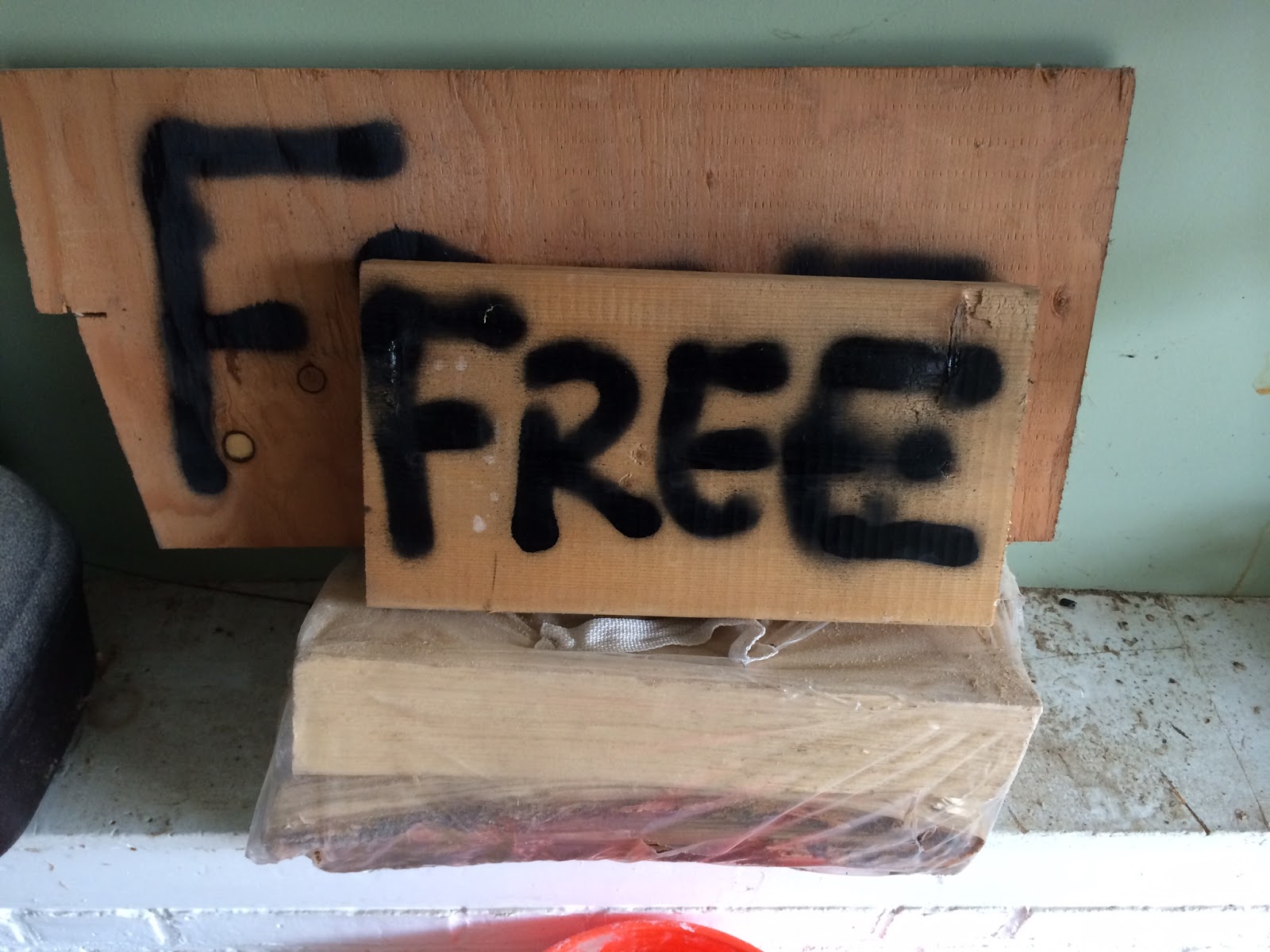 Over the last few years I've licked the storage problem.  I don't have garage sales anymore.  Too much preparation.  When something needs to be recycled to others I simply stick the item in the driveway, and place a "FREE" sigh on either side of it.  Then I glance at my watch.

Usually in less than a half hour the item is gone.  Rarely have I seen the person picking it up, but the times I have spoken to the new owners has been interesting.  One gentleman pulled a "U-ey"  in front of my house to come back to pick up a butcher block table and chair set.  It was old, and needed some refinishing.  The chair legs needed stabilizing, too. He saw the set, and thought it would be great for his grandchildren to use on his enclosed porch.  He envisioned them out there coloring on rainy days, and having lunch.  The work the set required was the price one pays for a free table and chair set, and he saw the value.

An old wooden screen door was snapped up by a man who worked at a local campground.  He wanted it for the office, and its wooden construction would bring back that familiar wooden door slap noise when the springs closed it tight against the jam.  That sound is something that modern metal screen doors just don't have.  A timeless sound of summer.

Last week I put two upright vacuum cleaners on the driveway with the signs.   Mary had stumbled on a great deal for a new vac that was ten times more powerful than the old ones, and a lot lighter.  The suction on the new vacuum was very strong, and could pull the cats from under the couch with little effort.  The old vacuums still had some life left, so I taped some replacement bags to one of them, with an extra filter, wheeled them to the Land of Tired Appliances. I dropped two  "FREE" signs at their feet, and bid them farewell.  Forty minutes later I checked on them, and they were gone, full dust bag, and all.

So, what have we learned here today?  Well, for one thing, recycling is always a good.  Extending the life of an item beyond its life with you is not only Eco friendly, but it is also a good thing.  Our mothers were right, sharing is a good.

We also learned that the something we no longer want, or feel is no longer valuable, is valuable to someone else; giving is better than  a trip to the recycling center any day.

I like this system.  It serves a great purpose, and is very efficient.  Initially, Mary didn't like the system, but she has since found a way to make it work for her.  If I am annoying her, which hardly ever happens, she will simply point to me, the "FREE" sign in the garage, and then to the end of the driveway.