I admire those that when something needs to be said, they can say it very effectively, but in a totally unexpected, and for that moment, a better way.  Sometimes it is the person that has the snappy comeback for some off kilter comment, a child that is called on to say grace for the first time, and nails it by rapping his blessing,  or grandpa offering a limerick toast at the wedding reception without mentioning Nantucket.

All unexpected, and can be very well done.

The other day, I saw an other example here in town.  We were driving east on Route 20, and came to a red light at the junction with Route 131.  We were in the right lane, and a motorcycle was in the left lane.  The light changed, and we all advanced to the next light some 150 feet away, and waited again.

We are used to waiting twice, some aren't, and have a feel they have a duty to make up for lost time.  The motorcycle felt that way, and when the light turned green, the rider leaned forward on his bike as he began clicking through the gears. We were neck and neck for about three to four seconds, then he was far ahead.  Far ahead until he came up to the Massachusetts State Police barracks on 20 just as a State Police cruise was pulling out onto the road.  They came up beside each other at precisely the same moment.

Now, what happened next was remarkable. 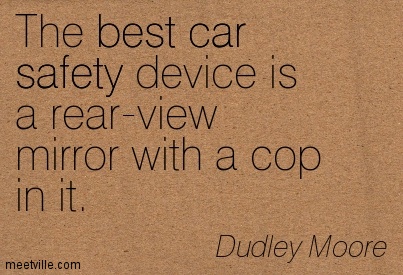 And, there they stayed.  Together, side by side, the cruiser setting the pace, and the motorcycle not daring to slice the wind any faster.  The action was subtle, but the act was not, and was received, and understood by the motorcyclist immediately.

They rode together under I-84, and further eastbound on Route 20.  Although we were a few car lengths behind them, we understood the message as well.  The trooper was teaching without ticketing, and his lesson was being very effective.  The motorcyclist was sitting more upright on his bike, not leaning in to the wind as he had been, a sign that he understood, and was complying.

The State trooper had decided to be teacher a few minutes before, and taught a lesson about obeying the posted speed limit, but not by pulling the motorcyclist over, and writing out a citation.  He instead chose a better way.  He demonstrated that the speed limit was not only for the civilian motorists, but for him as well.  Demonstrations can be much more effective than bookwork.   And, when the lesson had been taught, and the teacher felt coinfident that it had been understood, he allowed the student to take the lesson home.

We followed the motorcycle further up Route 20, and into Hobbs Brook Plaza.  At no time did his speed reach beyond the posted speed.

Obviously, the lesson was taught well, and learned.  The next step may be the hardest, and that's retention.  I hope it is retained.  Not many homework assignments can actually save ones life.  This one can.