Yes, I did write in an earlier post that it is big, and yes, it is larger than other buildings in the neighborhood.  That hasn't changed.  What has changed is my perspective.

In my previous post I spoke of designing to fit the neighborhood, in both size and design.

I believe they have done that.

The design of the building does fit the neighborhood.  No longer are we subjected to an industrial looking, flat roofed, brick building from another era.  This design, similar to all the other new Cumberland Stores, is not industrial at all.  In fact, it is nice, almost charming.

Although it is big, as I noted in the past, what I failed to note was that other areas of design, and building, would be able to offset its appearance, and allow it to be able to blend into the surrounding environment.

The choice of exterior lighting, the use of stone on the columns of the sign, and along the buildings apron, the landscaping with trees, shrubs, and grasses all have taken a large retail building, and softened it just enough so that it fits very well in the space it already had. 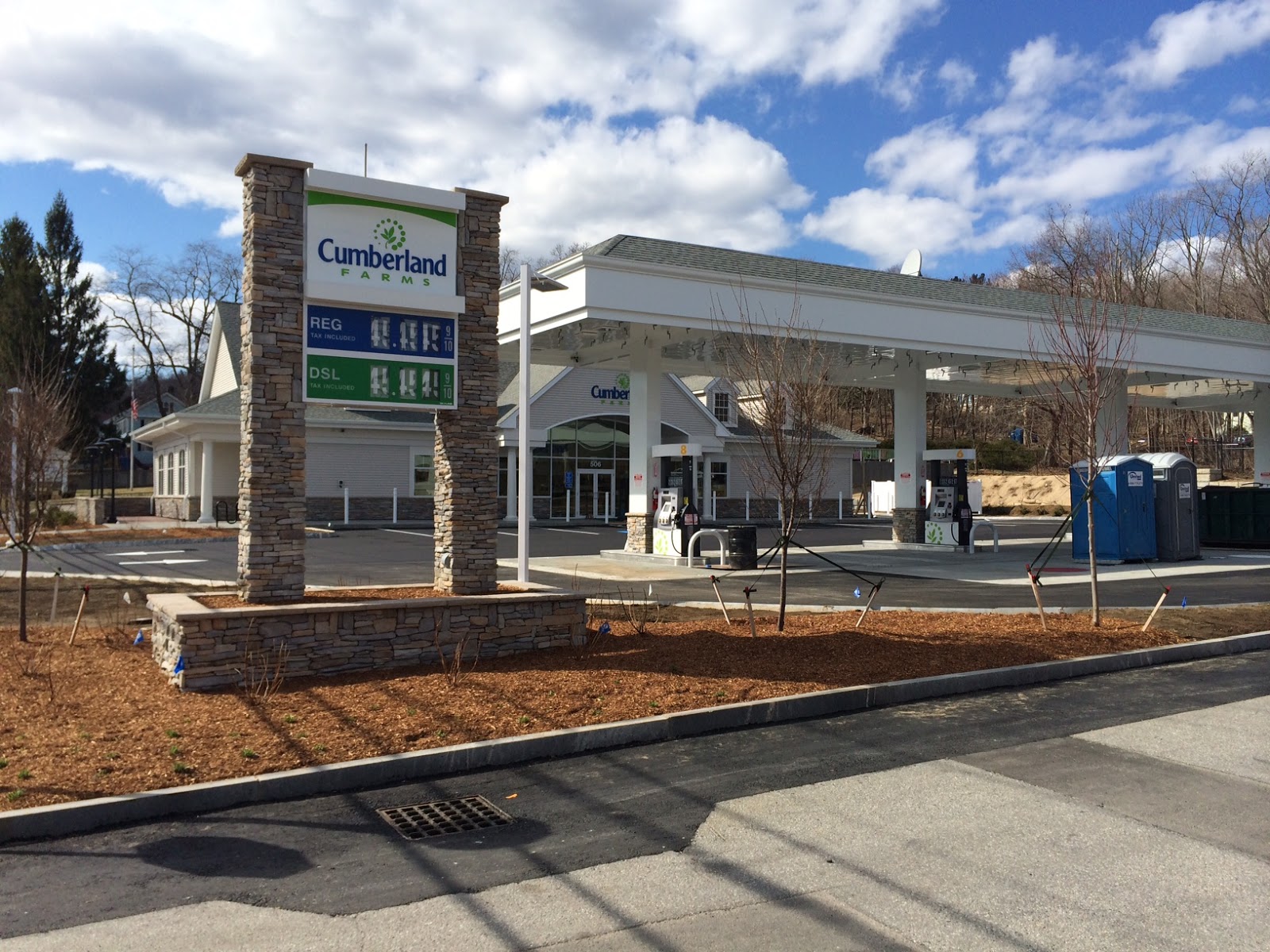 I didn't think any further out than what I saw being built back in December.  I didn't visualize the end result at all.

I really messed up on this one.

Not only is the land well landscaped, it is also noticeable that some thought went into everything from the outdoor lighting,  to the pump number, and placement.

The traffic pattern is now safer, more efficient, and able to handle more than four cars at a time at the pumps.  Now, more cars blocking the road idling perpendicular  on Hinman Street while waiting to fill up.  That used to frost me, as well as all the folks trying to get in and out of Hinman Street.

When an improvement comes to any neigborhood it shows that others think enough of the area to invest in it.  This encourages others to do the same.  Who knows what will come to the corner of Holland Road and Route 20 now.

I beleive that the designer, and builder have done a very good job not insulting the neighborhood with some retail monstrosity, and no, I am not on the Cumberland Farms payroll.  I just didn't think things all the way through when I wrote last time.

I wish all the other times I was wrong turned out as well as it did this time.

Thinking Out Loud In Sturbridge: They Went An' Built A Skyscraper

Thinking Out Loud In Sturbridge: Clueless In Fiskdale

Thinking Out Loud In Sturbridge: I Don't Think I Have The Whole ...
Scribbled by Wally Hersee on Thursday, April 10, 2014