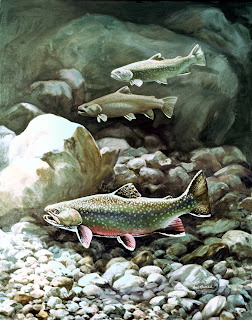 I enjoy learning. Trouble is, with my coming to understand a particular subject, my head generates so many questions that folks start looking for the duct tape to put over my mouth and a closet to stuff me into.

So, fair warning, get the duct tape ready.

I was reading in the Sturbridge Villager yesterday an article on the front page entitled "Brook plan draws locals' ire". The article reported that a series of dams on the Hamant Brook in the parcel of land purchased by the town from OSV should be eliminated in order to benefit the Eastern Brook Trout. It seems that this brook is one of only a very few left in Massachusetts that actually supports the fish today. With industrialization over the past hundred years the silting of the streams and brooks has changed the environment and made most them too warm to properly support the fish. The land in the Lead Mountain Parcel has been virtually untouched for one hundred years with the exception of some camp building that were constructed, and those small dams. No factories were built or other building was done along the banks of the brook to cause a silting of the water and the subsequent rise in temperature of the water. This has made the brook ideal for the cold water loving fish.

This area is essentially a time capsule, a forgotten waterway that has managed to support a species that in other areas of the state has become as rare as hens teeth. A biologist for the state Division of Wildlife and Fisheries, Todd Richards, suggested recently that the three dams along the brook be removed in order to improve the flow of the water on into the Quinebaug River, and restore the Brook Trout to the area. This suggestion is what drew the "ire".

According to Dale Favreau of the Sturbridge PLAC Committee if Sturbridge followed the recommendations of the biologist, "We're essentially going to take 10 acres and drain it. We'll lose a lot of habitat, and you'll have a hard sell."

Now, hear me out, and if I don't make sense, please enlighten me, as I said, I really do enjoy learning.

The Eastern Brook Trout is a fish that will follow the brook if it is unrestricted with dams and it will swim on into the Quinebaug River. The river flows on into the sea. The Brook Trout is a fish that will want to return to its home environment to spawn. First question: How is this fish going to return home with the many other dams on the river itself. I don't know if any of the dams in Connecticut have fish ladders to aid migratory fish, but the dam at Westville certainly doesn't, and that is only one of the several dams on the river in Massachusetts. What then? Are the fish that we are fso ortunate to have here in Sturbridge due to the damming long ago of the brook doomed to exile? Then that would mean we would become like the other areas of the state, a region without Brook Trout. Right?

I also agree that if the dams were removed it would leave a ten acre mud puddle. The land was purchased for recreation purposes. Angling is a recreation. Why not market the area as one of the few spots left in Central Massachusetts that Brook Trout reside?

It usually takes a few years for an environment to come back in some way after it has been altered by natural catastrophe, or something man made. The eruption of Mount St. Helens is good example of nature responding to rebuild itself. With in a short time after those dams were placed, the environment around the brook began to adapt. New species came there such as water fowl, fish, amphibians, insects, and mammals. They, too, began to adapt to the changes in the habitat. Today, these species are an integral part of the Lead Mine Parcel. If the man made dams are removed it will adversely affect the species that have come to call this area home, and the Brookies will have a free swim to the sea.

To me, it's simple, and I consider myself environmentally friendly, leave the dams alone, and market the area as I stated above.

The other point brought up in the article is the about the three dams themselves. I have only been on one of the dams, so I can't report on the others, but unless they are a danger to the town, they should be left alone. Proper maintenance of the dams is something the town inherited with the purchase of the property, so that is something that should be explored further. There are many dams in the Commonwealth that do require restoration, and I am not an expert, but if the structures do need help, then we should do what needs to be done.

So, there you have it, my opinion on subjects I know little or nothing about, just learning, and using some common sense.

One more thing. Read the article below. It was taken from the New York Times from 1894. Carefully read the last paragraph or two. It's de ja vu all over again.

If you have a hard time viewing the document below, please go to: http://www.scribd.com/doc/2074153/Massachusetts-Effort-That-Quickly-Came-to-Naught