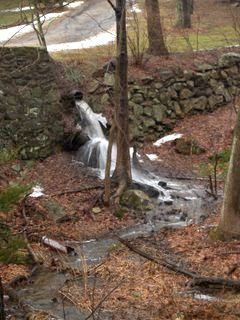 Just behind our house, down a sharp embankment and beyond the property line is something called an intermittent stream. When we bought the house in April of 2006 the stream was flowing hard. The sound of the water coming out of the culvert and onto the rocks was soothing. There were times when the flow was reduced to a trickle, but it was always there to some degree. That was until last summer.

This past summer, sometime around half past June, the flow stopped completely. After several weeks the stream bed was dry enough to walk on and not sink in up to my knees. I had walked on it the previous March and sunk up to my calves. I thought I was going to have to use my cell phone to call 911 for an extrication, but I wiggled around for awhile, and escaped. I must have looked mighty stupid standing there, jerking about like I had found a great tune on my iPod. I didn't do that again. I guess this is what is meant by an "intermittent stream". It's a stream, intermittently, and mud the rest of the time.

The stream remained dry for months. In December it began to flow again for a short time, and soon fizzled out until January. The photo at the left is how it looked this past week.

So, what excactly is an"intermittent stream" officially? Well, the following is the official definition taken from the Towns web site:

Well, apparently whatever the heck it is, it's handled on case by case basis.


We bought the house from a couple that had bought it from an estate. The couple whose estate it was had lived here for 60 of its 150 years. The yard was severly overgrown. It must have looked awesome at one time. There is an old well, near the stream, that is about 15 feet deep, and still has water. There was no cover on the well when we moved in so when I rebuilt the roof and supports, I built a cover with a couple of locks, too. Now I can sleep easier knowing my neighbors aren't going to go for a swim.

As we removed the overgrowth and brush, we discovered flowering bushes and tree, perenials and shrubs long hidden. Old tree limbs had fallen into the stream bed, and there was a large amount of plain old junk strewn around admist the overgrowth up on the embankement. Thirty pick up truck loads of brush, dead limbs, and sundry dead trees and vines we took out from along its banks . There are at least 5 more loads in the pile out back,and more dead wood to be taken out of the stream bed.

Judging form the trees, shrubs and flowers we found underneath years of debris it seems the couple that lived here for six decades loved this place. It's only right that we bring it back, and put our own spin on it. Just so happens we love playing in the yard.


But, this intermittent stream thing has me puzzled. I want to be able to do what is best for the stream, and whomever lives down there, but I'm at a loss as to how far one can go. Will the Conservation folks slap me with a cease and desist for clearing out the stream of debris to ensure its flow? I promise not to threaten any 4-toed salamanders, or 3-toed sloths while cleaning the stream. Once the area 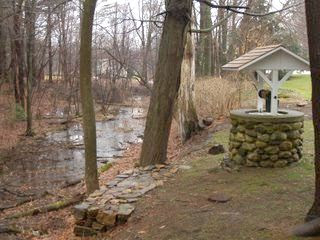 is cleared of the debris it will look great, and flow quite well on into the Quinebaug.

There is one other issue, though. A few days ago I spotted a small tree stump about 2 feet tall. On the top of the stump was fresh white wood shaped in a pyrimid, and it looked liked small pieces of wood chips on the ground below it. It is about 50 feet away across the stream so I had to use my binoculars to get a closer look. The first thing I thought of was beavers. But beavers here? In this little stream? There was no flow for six months, why now? And where the heck did they come from? Are they on a mailing list? The last thing I need is beavers. I've seen them before, down in the Hobbs Brook area off Charlton Street. They look like fat little toddlers in fur coats.

I have also noticed that the width of the stream is increasing. This may mean there is an obstruction further down stream. There is a culvert at the end of our property that the stream flows into and then under Route 148. It eventually joins another stream that comes down from Clark Road, and they both take a hidden path on to the river. I checked out the culvert today, and it is fine, so if there is a restriction it is most likely further down, and on the other side of the road, or even in the culvert itself.

I think most of us have a few special places that we gravitate to, this stream is one of mine. Sometimes I just walk over to the well, and stare off into the water pouring from the culvert, and let all those things that have velcroed themselves to me from the week fall off and flow downstream.

Want some unsolicited advice? Find a stream, or meadow, or a pine grove of your own, and once in awhile visit it. Let all those things that have sat on your shoulders for way too long fall free, and clear your head. You will be surprised how good you will feel after a good stare off into space.