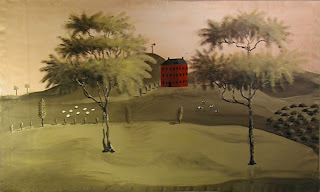 I often wonder what is it that attracts people to rural America. Of course, birth is probably the main thing, but when one is somewheres else, what makes them pack and move to the country. And by country I don't mean suburbia. Sure, they have woods, and fields, and maybe a horse farm, but I mean out where folks still milk cows, grow acres and acres of corn, have fairs, and tractor pulls, and sit and listen to a band on the common on a summers evening. A place where one can run into a farmer wearing a baseball cap and overalls at the hardware store buying a cotter pin.

What causes folks to leave what they have always known, their comfort zone, and move to a quieter, calmer place?

Besides country lanes, farmers in overalls, and tractor pulls what is it that attracts people? I think I know. It is the culture. Most places out past suburbia are small town and villages, with equally small populations. Everyone knows everyone else. One can't get lost in the shuffle, or misplaced, or overlooked. You're there, and they know you're there.

They not only know you're there, they know you. Quite different than suburbia. In suburbia only some may know you, and only some of them actually care about the little ones sniffles.

Some things inherently come with the culture of a place. Things like manners. Ever notice that more doors are held open for others the further out you go? Words like "thank you", and "please", and "take care, now" are said with sincerity, and not just grunted.

Respect is another trait that is still fairly pure. I would not go poking around in my neighbors mailbox to see what seed catalogs they subscribe to. I respect my neighbors privacy.
Even if I didn't know them. Children initially calling me "Mr. Out Loud" is respect. And, when I ask them to just call me"Thinking", and they do, that is respect on their parts again. They respected my request.

Respect is a given. It is a right, not something to be earned in passing. The old adage about respect being earned is used incorrectly. As it applies to ones self, yes, it is correct to a point. One has respect already built in, but through our words, and actions we must maintain it. We can't use the adage as it applies to others, either.

"He has to earn my respect, it is not just be given it" is wrong. He has your respect till something comes along to alter it. Kicking his dog is something that can lower ones respect for him. But, respect is a right. We all deserve it, and should receive it, but it is our responsibility to maintain it.

In the city folks become a faceless jumble. It is easy not to give respect to another without "seeing" their face, whether it be actually not seeing them, or just not choosing to. Road rage can come from this.

When folks live out past the high rises, the sprawl, and the traffic, this small town cultural thing is in their face. That makes people feel good. Oh, manners and respect are elsewhere, too, don't misunderstand me. It just seems that in a smaller world it is easier to see, and easier do.

Friendliness is something else that is almost universal in the country, with possible exception of the feuds among the mountain folk, and that is considered a sport by them. It's nice to walk into a store and be greeted by name, or at least recognized, or have your coffee already being poured and made just the way you like it as you walk into the coffee shop.

When you combine the things we know like the way a village looks early on a Sunday morning with a friendly greeting from a neighbor as they hold open the door for you at the store, the whole country thing hits home.

Welcome to my world. Welcome to Sturbridge.
Scribbled by Wally Hersee on Tuesday, February 05, 2008