Every Town Needs a Village, and Vice Versa 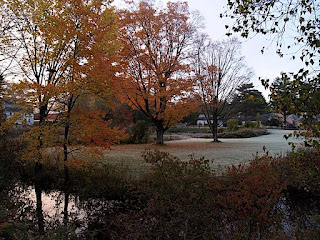 The times they are achangin'.
This past January Old Sturbridge Village rebounded big time. Their attendance for the month of January increased by 23% compared to January 2007.
Under the direction of CEO James Donhue, everything old is new again. Mr. Donhue has concentrated on bringing back what made OSV so successful years ago: more humans.

More costumed interpreters for the Village to explain things to people and to share stories. More things to touch and to become involved with. The construction of the new "Small House". As strange as it may seem, the Village is actually going back in time. Back to how things worked well. Sometimes it takes new eyes to see things better. As technology changes and becomes more advanced we are often tempted to follow the road it is leading us down. OSV has decided to take a different path, the old road.

When one walks through the doors of the vistors center, steps onto that dirt road and looks over the split rail fence into the hollow, one is immediatley transported to a much earlier time. There is smoke coming from the chimneys of the houses along the common, people walking on the roads, and working in the yards and fields. Animals in the fields. There is nothing from this century, or the last century in view, only a time, a moment, and there are people there to aid in your transition to this other world.

This is how the magic happens.

Walt Disney knew this. To make the make believe real, one needs to use what is real, and familiar. A live Tinkerbell on a wire over the Magic Kingdom at night lit only by a single spotlight gave such an illusion of reality, that it did became real. James Donahue seems to know this as well. If you want to teach some history, you need to make it as real as possible, and remove the modern day technology from the picture, and keep it hidden, and where it belongs, in the 21st century. By using more real people as interpreters from the past instead of brochures, pamphlets, and videos, one can not only learn about the past, but actually feel the past. Save the technology for when the visitor passes through the doors again into today, then use it wisely to educate further.

The decision to reopen the Oliver Wight Tavern at OSV was a bold move. Only opened a few years ago, it was not given the chance to build a reputation before its plug was pulled. But, those times were tougher. Money was very tight, and something had to give. Now, with more money coming in from fund raising, increased mememberships, grants from the Commonwealth, and a very generous anonymous donor, some breathing room has been made, and the changes responsible for OSV's remarkable comeback could be made.
Recently, Alexandra McNitt, Director of Central Mass South Chamber of Commerce stated, "
“They’re on the right path, but I think they still need a lot of support from the community.” She spoke of businesses coming to town that would complement OSV. Businesses like art studios, craft shops, and "outdoorsy" businesses.

Sounds familiar. I like the way she thinks.
Maybe we've been thinking about this whole ecotourism, attracting folks to Sturbridge thing the wrong way. Maybe we, too, need to get a new set of eyes. Seems we have been thinking about utilizing what we have here like the outdoors, lakes, shopping and restaurants to attract people to our area, which is fine, and a wonderful mission, but maybe we could tap into a resource already here to get things going. Something like Old Sturbridge Village.

By promoting what we have directly to those that come here for OSV we could jump start the rest of the mission. The people are already coming, now to capture their curiosity and show them the rest of the area. 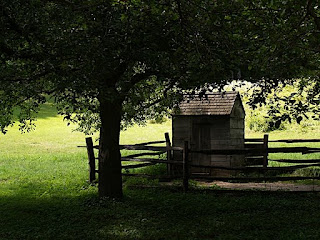 The most basic and easiest way to tap this tourist resource is with signs. I know, after all this talk, discussions, all the meetings, and written opinions --signs?

Now, before you start about sign bylaws, and size and color of signs in a historic area, and the rest of the stuff that gets folks bogged down, think about it. You are a visitor leaving Old Sturbridge Village, and you are exiting the parking lot. Where to? Are you ready to get back home right away? Do you have some time to poke around town a bit? Well, if there was a sign as you came out of OSV on Stallion Hill Road pointing to the trails at the top of the hill, and you were in the mood for a walk, you just might follow the sign.
Simple.
But, what if you are just in the mood to do some shopping, or are a bit hungry? Well, after you took a right out of the parking lot and were driving east on Stallion Hill Road, and just at the intersection where you decide whether or not you want to go the way you came , by taking a right onto the back road to Route 84, or a left onto Route 20, you see a sign pointing to things like The Publick House Inn, or The Town Common, Yankee Candle, The Yankee Pedlar, New England Traditions, The Tin Smith, Antiques or any one of a dozen other shops. Suddenly, instead of folks driving back to New Jersey on 84, they are being filtered into the town.
People need to be led. We're sheep, for the most part. Point us in a direction we might like, and we'll go there. But, we need to be pointed in the direction first. Signs would do a great job of pointing. They are a simple thing. Sort of old fashioned, really. No flashing lights, or LED's, just a board with some words painted on it, and an arrow. Take a lesson from James Donahue, keep it simple, and go for things you know work.
Who knows? In a short tim 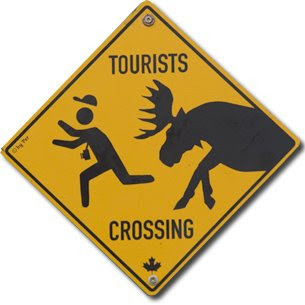 e we can post a few of these signs as well.