A few weeks ago someone made a comment about Sturbridge not being Mayberry. I'm still not exactly sure what their point was, but I beg to differ. Editors Note: The comment actually did state that Sturbridge was Mayberry, and it was the writer of this post that misrepresented what was left in the comments. The writer has been severely punished.--ed.

Mayberry, was the mythical home town for the Andy Griffith Show. Although, attributed to Mount Airy, North Carolina, it is Everytown.

The characters in the long running TV show made the show what it was; it certainly wasn't the plot lines. The characters were folks we could relate to. We all knew a Sheriff Taylor, an Aunt Bea, or an Otis the Town Drunk.

Andy Taylor was Mayberry's sheriff. A widower with a young son, he lived in a fine old home with his Aunt Bea. He was a man of common sense, soft spoken and always seemed to get folks out of the jams they got themselves into. His method was simple. Andy would give his advice when asked for it, or if something struck him as being out of kilter. Take it or leave it, the advice was always good, but if one took his advice right away then there would be no show. Andy would let the cards fall where they may once he spoke his mind. Folks seldom ask for advice, and when given it, they seldom heed it. In the end, after the other character would go through some life altering events that could have been easily avoided, all was well when they remembered the sheriffs advice.

We all know a Sheriff Taylor. They may be a co-worker, a neighbor, or just someone in town that is usually steadfast, and always there when things get shaky.

Andy's deputy, Barney, played by Don Knotts, was usually the one causing most of the stirs in town. He was diligent, and took his job very seriously. He was also a klutz that didn't put a whole bunch of thought into the ramifications of what he was about to do. Andy bailed him out in almost every episode. He was great comic relief, and every town needs that.

Having "Barneys" around is fine, but they need an Andy within earshot otherwise they'd end up shooting themselves or burning down the Sheriffs Office.

There was Otis Campbell, the town drunk with a heart of gold, and Goober who owned the gas station. Goober didn't have much going on upstairs, but he knew cars. I know people like that. They have enormous know how, and skills pertaining to just one thing. Take them out of that environment and they are lost. Goobers are also great to have around as long as we use their knowledge and skills as they are, and know their limitations, too. We also need to make sure they don't expand their horizons too fast, otherwise we'd be calling Andy.

In the old show there was Floyd Lawson the barber, Howard Sprague the County Clerk, Emmett Clark the Fix-it man, Helen Crump, the sheriffs girlfriend, and of course, Opie, Andy's son. There were many other recurring characters in the show, each with a definite personality, and each had a particular affect on the the town of Mayberry. If we think about it, we can identify many of those personalities with folks we know right here. I certainly know an Emmett Clark, and a Howard Sprague.

My favorite character, besides 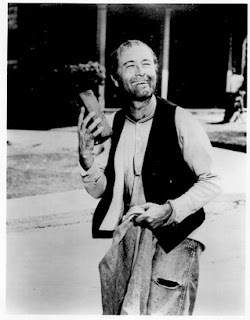 Barney, was Ernest T. Bass. Ernest had a recurring role on the show. He was the simple minded mountain man that would come down from the hills on occasion to raise a ruckus. He had a one track mind, and seemed to always be thinking that Andy was after his girl, Charlene. Couldn't shake him from that line of thinking, so they would have to outsmart him. He also liked to attract attention to himself. One way was to stand outside the sheriffs office and chant, "It's me, it's me! It's Ernest T.!" Then he'd throw a rock through the window to punctuate his message.

I've known a lot of Ernest T's. I know one now. Single train of thought, constantly raising a ruckus, and always trying to extend his fifteen minutes to an hour. He does a lot of chanting outside the office, and when his message is said, he throws a rock through the window to punctuate his thoughts. He's a hoot.

Yep, Mayberry is Everytown. Our town is no different. The landscape is all well and good, but it take characters to make a village. As long as we know who the players are, and their purpose and limitations, then all is good. We need everyone one of them, even the Ernest T. Bass's. They are the ones that keep us on our toes, and sharp enough to duck when a rock flies through our windows, and their antics most always make me smile.

Sometimes, when I am reading the paper I can imagine the words, "It's Me! It's Me! It's Ernest T!" coming off the Opinion Page. I wouldn't want it any other way, after all, every village needs one.
Scribbled by Wally Hersee on Thursday, February 14, 2008