"Marge, I'll have a little history with my lunch, please." 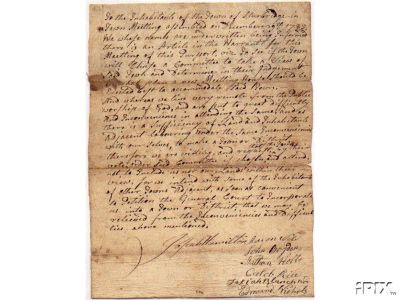 History has always amazed me, especially if it was something I could relate to. The history of my hometown is one thing that has always attracted my eye.

The document above was obtained by me on Ebay a few years ago. It is a very telling document. It is a first hand account of a battle fought for twenty years prior to the document being written, and one that would not be settled for many, many more.

The text of the document is below.

"To the Inhabitants of the Town of Sturbridge in Town Meeting assembled on December 9th, 1783. We whose names are underwritten being informed there is an Article in the Warrant for this meeting of this purport, viz. to see if the Town will choose a committee to take a View of said town and determine in their Judgment in what place a new Meeting House should be erected (unreadable) to accommodate said Town.______And, whereas we live very remote from the Public Worship of God, and are put to great difficulty and Inconvenience in attending the same, and as there is sufficiency of land and Inhabitants adjacent labouring under the same inconvenience with our selves, to make a Town, or District, ___therefore we are willing, and regret that the Town, by their vote, order said Committee if chosen, and attend, not to include us nor our land within their view, for we intend with some of the inhabitants of other Towns adjacent, as soon as convienient to Petition the General Court to Incorporate us into a town or District, that we may be relieved from the Inconvenience and difficulties above mentioned.

What this paper is referring to is the plight of several powerful citizens of Sturbridge. A new Meeting House was to be built in town, and its location was most likely to be on the Town Common, although the Warrant Article was just to take a "view" of the town in order to determine the best place for the Meeting House. The undersigned felt, after 20 years of up hill fighting, that the location would not consider those that live far out from the center of the village, and that to attend meetings at the Meeting house would continue to be a hardship. Some lived as far as seven miles away, as far out as where the rotary is now in front of American Optical in Southbridge. They really felt that they would left out, again.

So, how did they fight back this time? They tried reverse psychology. Yes, you can take a "view" of the town to determine the location for the meeting house, but don't include us in the "view" or our land in your "view". We have a better idea. See, we are going to petition the General Court to incorporate us into a new town, or district. That way we can build our own meeting house near where we live, so we won't have the commute any longer.

I believe that the undersigned had hoped that the powers that be would be swayed by their threat of splitting from the town, and a centrally located meeting house would be built.

In the years that followed, the Town of Sturbridge did approve the building of a meeting house in what is now Southbridge. It was started in 1797, and completed in 1800. However, the year before construction began, Joshua Harding petitioned the town of Sturbridge that a portion of the towns land be set off with parts of Dudley, and Charlton. That article in the town meeting was voted "That this article subside", which is an easy way of putting the article off to the side, and not voting on it. They did it again in 1798, and in 1800, as well.

The petitioner's were ticked off. They refused to partake in events at the meeting house on the Common, and instead, attended services at the Baptist Church on Fisk Hill. Since the petitioner's were not successful in establishing a separate town, they formed a poll parish, and we successful. It was granted on June 9, 1800, and after one more meeting in the winter of 1801 where the towns of Charlton, Dudley, and Sturbridge were ordered to attend to voice any objections to the formation of the poll parish. what objections that were voiced were not considered significant enough to stop the incorporation of the Poll Parish. It became official on February 28, 1801.

One would think everything would be fine now, right? Not quite.

It seems that with the original petition it was only to apply to the original petitioners and their land. Once they began to die off the very survival of the Poll Parish was threatened. The residents of the parish tried to have the original document amended, but after three unsuccessful attempts all they could get was an improvement on the original grant. For eight more years, the parish would fight for their right to be a separate town with its own boundaries. Dudley, Charlton, and Sturbridge fought against it. Sturbridge was the strongest in opposition.

Finally, on February 15, 1816, Southbridge was incorporated as a town.

The rest is, well, history.

So, what can be learned from this bit of history beside the obvious? Well, for one thing, things have not changed in 225 years. There will always be an issue, or agenda that is close to one groups heart, and will be opposed by another. If the opposing group is the one in power, one can look for a long fight before it will become a warrant article, or even voted on, or put in place as a policy. But, the main lesson to be learned is that after 33 years, what was originally sought after, by those on the document above, happened. It took tenacity, and commitment of those involved. They never gave up. They were not distracted.

Today, although the issues may be different, the passion is the same. However, it is easier for us to become distracted from our objective than it was in 1800, after all, we have cable.

So, no matter your endeavor, stay focused and committed, and keep in mind that compromise is not a "four letter" word, "quit" is.
Scribbled by Wally Hersee on Wednesday, February 06, 2008