Sometimes when we're roaming the internet we may stumble across a web site that is designed for a particular faction of society that we find appalling. Quite by accident we may come across a site that has multiple swastikas plastered on it with neo-nazi or white supremacist rhetoric. Nothing we can do about it, but click ourselves away. The symbol of hate, and death tears at our emotions, but the first amendment insures that they can speak freely.
Another symbol you may find in your wanderings is the Communist Hammer and Sickle. It was used by the now defunct Soviet Union since it's inception in 1917. Many other communist countries had a version of it either on their flags, statues, or other symbols of their country. Historically, it is a good thing to study the cultures of both symbols, to learn. The Nazi's were responsible for millions of military deaths, and civilian deaths during their reign from 1933 to 1945. Most of us understand, and associate that symbol with hate, and death. The Hammer and Sickle is also a symbol of death, and hatred. Millions of civilians died in the purges under the Soviet Unions Joseph Stalin who proudly flew that red flag with the hammer and sickle.

When either symbol is used in an historic context we can learn much about those times. Either symbol can be used in a way to frighten, humiliate, and defame.
There is little difference between spray painting a building with a swastika, or associating an individual with the hammer and sickle, or referring to a place as the Republic of Hooville set against a red communist flag. It shows that the offender has struck bottom, and is lashing out in the most horrendous and hateful ways. They are no longer able to make their point in a way that is acceptable to others.
It is not journalistic license. It is what it is, associating a place, and persons with a culture of hate and death for purposes of intimidation, and to incite others in their way of thinking. The technique is as old as man himself. It works, and that is why you still see the technique used today.

Far too many died in Korea, and in Viet Nam fighting to eliminate communism, and their symbols. My father, a Korean War veteran, died of injuries he received during that conflict. It is offensive to their memories that that symbol would now be used as a tool to offend fellow citizens.

When this despised symbol is used for self promotion and shock value, especially on this Memorial Day I see no humor in it. I then can not help but ask if those responsible have any sense of decency. It is obvious that they think nothing of defaming those we remember for the sake of political showmanship.

It has gone too far. 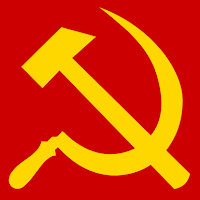 Early researchers attempting to tally the number of people killed under Stalin's regime were forced to rely largely upon anecdotal evidence. Their estimates ranged from a low of 3 million to as high as 60 million.[61][62] When the Soviet Union collapsed in 1991 however, evidence from the Soviet archives finally became available. The archives record that about 800,000 prisoners were executed (for either political or criminal offences) under Stalin, while about 1.7 million died in the GULAG and some 389,000 perished during kulak forced resettlement — a total of about 3 million victims.

Debate continues, however,[63] since some historians believe the archival figures to be unreliable.[64][65] For example, some argue that the many suspects tortured to death while in "investigative custody" were likely not counted amongst the executed.[66][67] Also, there are certain categories of victim which it is generally agreed were carelessly recorded by the Soviets — such as the victims of ethnic deportations, or of German population transfer in the aftermath of WWII.

Thus while some archival researchers have estimated the number of victims of Stalin's repressions to be no more than about 4 million in total,[68][69][70] others believe the number to be considerably higher, with a "middle estimate" of 40 million.[71] Russian writer Vadim Erlikman,[72] for example, makes the following estimates: executions, 1.5 million; gulags, 5 million; deportations, 1.7 million (out of 7.5 million deported); and POWs and German civilians, 1 million — a total of about 9 million victims of repression.

Some historians have also included the 6 to 8 million victims of the 1932–1933 famine as victims of repression.[73][74][75] This categorization is controversial however, as historians differ as to whether the famine was a deliberate part of the campaign of repression against kulaks or simply an unintended consequence of the struggle over forced collectivization. (See also: Droughts and famines in Russia and the USSR).

Regardless, it appears that a minimum of around 10 million surplus deaths (4 million by repression and 6 million from famine) are attributable to the regime, with a number of recent books suggesting a likely total of around 20 million.[76][77][78][79][80] Adding 6–8 million famine victims to Erlikman's estimates above, for example, would yield a total of between 15 and 17 million victims. Pioneering researcher Robert Conquest, meanwhile, has revised his original estimate of up to 30 million victims down to 20 million.[81] Others, however, continue to maintain that their earlier much higher estimates are correct.[82]"